Latina Lista: News from the Latinx perspective > Columns & Features > Guest Voz > Guest Voz: Before U.S. advises other nations on how to practice democracy, it must start at home — with Puerto Rico

Guest Voz: Before U.S. advises other nations on how to practice democracy, it must start at home — with Puerto Rico 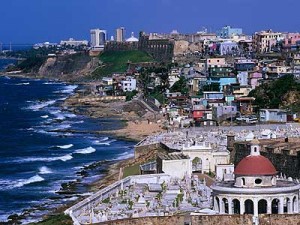 Of course, the reason for granting automatic American citizenship to a people whose first language is Spanish is because the island has long been a territory of the United States. Yet, citizenship doesn’t equate with full political equality.

Dr. Greg Acevedo, an associate professor at Fordham University in New York, examines the complex relationship between the island and the mainland and the simple solution it would take to help steer Puerto Rico onto a healthy and profitable course in the 21st Century.

Fifty years ago, West Side Story jetted and sharked its way into the hearts of America. Half a century later, what does the average U.S. citizen know about Puerto Rico and Puerto Ricans?

I’m guessing much of it has to do with sandy beaches, Marc Anthony and J-Lo, the island’s success in Miss Universe competitions and international athletic events, and, of course, the star-crossed Maria and Tony.

But I’m betting that most Americans don’t know that Puerto Rico is, at best, a fledgling democracy — and that U.S. control over the island is the main reason why Puerto Rico hasn’t successfully developed a legitimate democracy.

The first step on the road to democracy is self-determination, but Puerto Ricans living on the island have never had the chance to exercise that right. What’s more, the U.S. has had over a century to grant Puerto Rico that right, but it hasn’t.

A bit of background: In 1897, after decades of struggle against colonial rule, Puerto Rico secured autonomy from Spain, but it was preempted from achieving full-fledged autonomy when the island became an official territory of the U.S. a year later.

From the start of their relationship, the U.S. kept a colonial-like grip on the island’s governance. It took 50 years for the U.S. to grant islanders the right to elect its own governor. In 1951, the U.S. loosened its grip a bit, granting the island the right to craft its own constitution and to fashion a “new” status as a commonwealth. In terms of self-governance Puerto Rico had finally made it back to where it was in 1897, but it remains a U.S. territory, which seems like “colony lite” to me.

I can hear the voices of dissent: that Puerto Rico should be nothing but grateful, and has received numerous benefits from its arrangement with the U.S. Take U.S. citizenship. Since 1917, Puerto Ricans on the island have acquired US citizenship as a birthright. Certainly, the power of the U.S. passport and the freedom of movement it affords is no meager benefit.

In truth, Puerto Ricans are second-class citizens who have not been able to exercise the full spectrum of their voting rights.

The contradictory nature of Puerto Rican citizenship is best illustrated in the grave responsibility of military service. Like stateside citizens, Puerto Ricans on the island are subject to military duty, yet they have no direct representation in Congress, which sanctions wars, and they cannot vote for the commander-in-chief.

Second-class citizenship mirrors the island’s showcase “sovereignty.” During the Cold War era, the U.S. strategically attempted to use Puerto Rico as a model in the practice of democracy and economic prosperity. But the island has never been able to pursue its own path in intergovernmental or economic relations with other countries without the approval (read: control) of the U.S.

The dominant mantra in international politics today is that democracy and economic development go hand-in-hand. It’s a model that the U.S. promotes around the globe — yet it’s one that Puerto Rico has never had a chance to try out at home.

Puerto Rico’s smoke-and-mirrors “democracy” continues to wrestle with high rates of poverty and stagnant economic development. In a 2008 report by the World Bank gauging 215 nations in terms of economic growth, Puerto Rico had the dubious distinction of ranking 211th, in the same range as the Palestinian territories and Zimbabwe.

Unemployment and poverty in Puerto Rico exceed levels in the 50 states. In 2010, the U.S. Census Bureau pegged the island’s poverty rate at 45%; double that of Mississippi, which had the highest poverty of any state (22.4%).

Does the political status of Puerto Rico have anything to do with Puerto Rican poverty? As Richard Figueroa, a Republican-leaning attorney and former diplomat in the U.S. Department of State admitted in a November 12 opinion piece in El Nuevo Dia, “The ambiguous nature of the political relationship of Puerto Rico with the United States is part of the main root of the economic and social problems of the island.”

Both Congress and the White House have had ample time and opportunity to resolve the U.S.’s ambiguous political relationship with Puerto Rico. On December 23, 2000, President Bill Clinton established the President’s Task Force on Puerto Rico’s Status. Its goal is to recommend options for Puerto Rico’s path to self-determination. Eleven years later the Task Force still exits and Puerto Rico’s status remains the same.

The Puerto Rico Democracy Act was introduced in Congress first in 2007 by Congressman José Serrano (D-New York), and again in 2009 by Puerto Rico’s Resident Commissioner Pedro Pierluisi, the island’s non-voting member of Congress. The bill sought to “provide for a federally sanctioned self-determination process for the people of Puerto Rico.” It died in the Senate when the 111th Congress closed.

In a March, 2011 report released by his Task Force on Puerto Rico’s Status, President Obama said that he is “firmly committed to the principle that the question of political status is a matter of self-determination for the people of Puerto Rico.”

The very last lyrics to the finale of West Side Story are “somehow…some day!”

So, get on with it. When do we get to the final scene?

Dr. Gregory Acevedo is associate professor in the Graduate School of Social Service at Fordham University in New York. Dr. Acevedo is a fellow with the Op Ed Public Voices Thought Leadership Program.