LatinaLista — Six states have enacted some form of government ID laws, meaning that citizens cannot cast a vote until they show some form of ID. The assumption is that this law should be no big deal. After all, most people have a driver’s license or a passport or some form of ID, right? 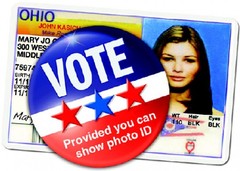 The majority of people may have an ID but there is a percentage who do not. According to the Brennan Center for Justice at New York University School of Law:

Many citizens who believe they have valid and sufficient photo IDs often do not. A national survey conducted after the November 2008 election found that 95% of respondents claimed to have a driver’s license, but 16% of those respondents lacked a license that was both current and valid. So of the of Americans who possess a photo ID, many lack proper identification that would enable to them to vote in elections under the new laws passed in Wisconsin, Kansas, Texas, South Carolina, and under legislation pending in many more states.

The onslaught of Voter ID legislation is even attracting the attention of political satirists. Robert Colbert of the Colbert Report pointed out some interesting contradictions of these laws in a segment that underscore the hypocrisy and suppression of these new laws.

As a result, more and more people who understand the consequences of such laws on the books are speaking up. The following post is by Wade Henderson, president of the Leadership Conference on Civil and Human Rights and Mark Perriello, president of the American Association of People with Disabilities, who support election reform but not when it purposely deprives citizens of their right to vote.

Democracy in America is under attack. Politicians in dozens of states are turning back the clock by denying the vote to their own citizens. Photo ID requirements, shortened early voting periods, limits on poll worker assistance, proof of citizenship requirements, restrictions on same-day registration and disenfranchisement of former felons — all disproportionately deny voting rights to people of color, people with disabilities, students, low-income workers and seniors.

Proponents of voter ID laws claim that voter fraud is commonplace, yet multiple studies have shown that the problem is essentially nonexistent. And anecdotal evidence held up by these politicians is consistently debunked as myth.

Voter identification is a convenient euphemism for voter suppression. A full 11 percent of voters currently do not have ID. Most of them are seniors, people of color, people with disabilities, the poor and students. In fact, about one out of five nonwhite citizens and citizens over age 64 do not have government-issued ID. This is not about reducing fraud but part of a coordinated campaign of subtle intimidation intended to suppress the political will and empowerment of millions of Americans.

Election reform is desperately needed, but instead of restricting the right to vote, we should be expanding it by implementing a modern and accessible system for holding elections.

There are more than 30 million Americans with disabilities of voting age, yet the Federal Election Commission reports that there are more than 20,000 inaccessible polling places. Some are located in basements or buildings without ramps, and others only offer machines that are outdated and unworkable for a person who is blind, deaf or physically impaired.

Too many citizens with disabilities can only cast their vote curbside, or are denied the right to a secret ballot when they have to speak their vote out loud for someone else to mark down. If impediments were removed and people with disabilities began voting in the same proportion as other Americans, fully 3.2 million more people would be casting ballots.

It is the duty of our policymakers to remove the barriers to participation for all citizens, including those with disabilities.

Modernizing the system with automated registration, online access to records and accessible voting machines would allow more than 65 million eligible Americans to participate. Investing in a uniform, simplified process for voters would eliminate unnecessary bureaucratic processes, save states money and save election officials time. Right now, state legislators are instead committed to doing the opposite.

Requiring photo ID and imposing other restrictions on the right to vote will not strengthen our democracy. It will only serve to exclude many American from participating in the important decisions that face us all as we work to create an America that is as good as its ideals.

Previous Post Latinas have much to gain with free access to birth control
Next PostSpotlight Nonprofit: Connecting children with healthy eating in "bite-sized" lessons

Latinas have much to gain with free access to birth control
Comment
Spotlight Nonprofit: Connecting children with healthy eating in "bite-sized" lessons