Latina Lista: News from the Latinx perspective > Palabra Final > Immigration > If Sen. Rubio wants to understand US detention policies, he should forget Guantanamo and go to southwest border

If Sen. Rubio wants to understand US detention policies, he should forget Guantanamo and go to southwest border

LatinaLista — Though Marco Rubio’s parents fled Cuba, Rubio had never been to the island. Technically, he still hasn’t though he did visit Guantanamo Bay today. Rubio was visiting the military installation as a member of both the Senate Intelligence and Foreign Relations committees. 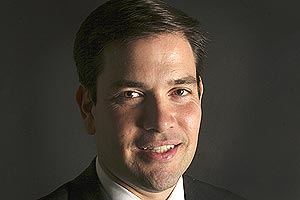 While it seems like odd timing for an individual widely assumed to be on the GOP short list of vice presidential hopefuls, POLITICO reports that the trip had been scheduled since last summer but kept getting delayed because of scheduling conflicts.

But in an obvious strategy to bolster his foreign policy credentials, there are several public reasons given why Rubio is going to Guantanamo:

This visit will allow Sen. Rubio an opportunity to better understand the role Guantanamo Bay plays in US detention operations, and examine how the military commission process for trying the terrorists housed there is proceeding.

However, though Guantanamo is still in operation it’s not anywhere near as active as it once was. An article that appeared in Vanity Fair in January 2012 noted in a timeline of the facility the following:

January 11, 2012: The 10th anniversary of the arrival of the first detainees at Guantánamo. In all, 779 prisoners have been held at Guantánamo since the facility opened. More than 550 have been transferred to the custody of other countries or given freedom and resettled. Eight have died in U.S. custody. 171 remain in detention at Guantánamo. Of these, 59 have been cleared for transfer. As many as 36 will have their cases heard under a reconstituted military tribunal system; so far, military tribunals have adjudicated only a handful of such cases. The remaining detainees could be held in indefinite detention, perhaps for life, under a policy set out by the Obama administration in March 2011. These detainees, according to intelligence assessments, are too dangerous to release; at the same time, they cannot be brought to trial because of evidentiary problems. Unless Congress changes its mind about incarceration on the U.S. mainland, these remaining detainees will be held at Guantánamo, which will remain open indefinitely.

So while Guantanamo Bay is of significance, it’s not where the most action in apprehending and detaining “foreign invaders” is happening. That distinction belongs to our southwest border with Mexico.

In Texas, from October 2011 – April 2012, over 6,500 undocumented children and teens have been captured and detained in temporary detention facilities. It is a crisis that Rubio’s committees don’t seem to understand or are conveniently ignoring.

It’s one thing to visit a facility, the brainchild of a GOP administration, that is largely disdained by the global community for its torture practices and houses far fewer detainees than at its heyday. But it’s quite another statement to make to visit a region of the country that is actively capturing and detaining children and teens who would attempt to cross our borders illegally.

Do these children and teens pose a security risk to the country like the terrorists at Guantanamo Bay are believed to possess? No.

But if Rubio was really concerned about national security and detention policies, he would be visiting the southwest border, visit with these children and teens, talk to them and understand why they’re coming, who helped them, or abandoned them, where they want to go and how they’re being treated here.

Rubio is one of the few members, if not the only one, on either committee that has the capability to speak and/or understand these children and get their stories.

In the end, it would be a far more productive trip than touring a facility that one day is slated to close. Not to mention, it would go a long way into branding Rubio as a congressman who cares and that is a priceless commodity in today’s politics.

New Latino veterans reintegrating into US society face more challenges than before
Comment
Intrn'l Video: Chilean students fight for the right to have a free public education