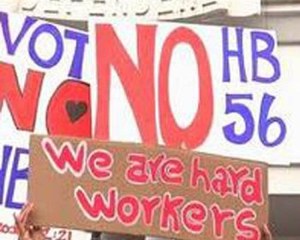 The editorial pointed out the devastating unseen consequences of the law on the state’s economy.

Farmers can tally the cost of crops left to rot as workers flee. Governments can calculate the loss of revenues when taxpayers flee. It’s harder to measure the price of a ruined business reputation or the value of investments lost or productivity lost as Alabamians stand in line for hours to prove their citizenship in any transaction with the government. Or what the state will ultimately spend fighting off an onslaught of lawsuits, or training and deploying police officers in the widening immigrant dragnet, or paying the cost of diverting scarce resources away from fighting real crimes.

While commentary after commentary point out that when legislation like HB56 is passed an exodus of undocumented immigrants is likely to result leaving behind an absence felt in the state’s coffers, no one mentions the economic toll it takes on the immigrants themselves.

Maybe there’s an assumption that undocumented immigrants are either so resilient that they will bounce back and find work elsewhere or really will pack up and go back to their native countries.

Well, news of a new report, via the news organization Frontera Norte Sur, and issued by BBVA Research, an arm of the BBVA bank in Mexico, disputes both assumptions for Mexican immigrants.

According to the report, anti-immigrant legislation, record deportations and an unsteady economy have combined into the “perfect storm” of throwing 30 percent of undocumented Mexican immigrants overboard into a sea of poverty. The statistic is the highest since the Great Recession started.

The report’s authors noted that before the recession, poverty among Mexican immigrants was declining in the United States and stood at 22 percent.

The study’s authors also found that it’s not just recent immigrants who are experiencing poverty.

If the United States was nothing more than a source of employment, common sense dictates that most of these undocumented immigrants would return home. Yet, given the few numbers of Mexican migrants who have actually returned to Mexico voluntarily, it looks like these immigrants are already home.

Isn’t it time that they be recognized so they can get to work to help troubled state and city economies? Lift their families, who no doubt include US-born children, out of poverty? And start being full participating members of society?

No one enjoys living in poverty or living under constant threat of persecution and deportation but it’s far worse to be driven from a country who gladly accepted the hard work of low-paid labor and now declares Public Enemy #1 the very people who helped contribute so much in building and feeding this country.