Latina Lista: News from the Latinx perspective > Palabra Final > Politics > More than ever it makes sense for political campaigns to be bilingual

LatinaLista — An article syndicated today in newspapers across the country asked a question that was bound to be asked sooner or later in this election season — Should political campaigns reach Hispanics in English or Spanish? 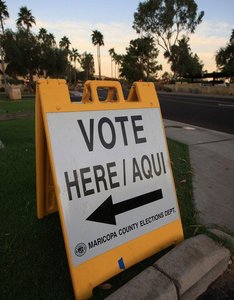 Hand-in-hand with that question is if it’s necessary for political candidates to be interviewed by Spanish-language media. The answer is a simple — sí!

The smug assumption used to be that any Latino who was qualified to vote must already speak English. Before the last presidential election, the assumption, for the most part, held water. Then the 2008 presidential campaign happened. It rocked the world to the point that a new reality was created — Latinos, with varying degrees of English proficiency, were being sworn in as new citizens at a rate unlike before.

Despite Mexicans’ historically low rates of naturalization, 122,000 attained citizenship in 2007, up from 84,000 the previous year, with California and Texas posting the largest gains. Salvadorans and Guatemalans also showed significant increases at a time when the overall number of naturalizations declined by 6%.

At the same time, the number of citizenship applications filed doubled to 1.4 million last year, the report by the U.S. Office of Immigration Statistics found.

Data from the Department of Homeland Security’s Immigration Statistics report that an estimated 203,131 new Latino voters took the oath of citizenship in 2011. Again, not all fluent English speakers.

With candidates promising something new every day or tweaking previous promises or defending themselves from attacks from one another, it’s essential for the Latino constituency to hear from both candidates in both languages in order to make a fully informed choice that will impact our nation, at the least, for four years.