Latina Lista: News from the Latinx perspective > Palabra Final > No need to worry Romney will ever claim his Mexican roots for political gain

LatinaLista — A new poll shows that not even sharing the same religion can deliver a voting bloc to a political candidate. According to today’s Gallup survey, Roman Catholics are divided between Obama and Romney. 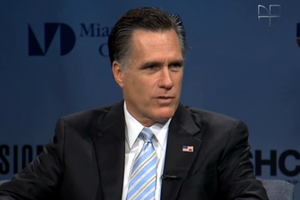 Hispanic Catholics — about 18% of the total group of Catholic voters — are overwhelmingly likely to support Obama over Romney, while a majority of non-Hispanic white Catholics support Romney.

It’s a good thing then that Romney doesn’t claim Latino heritage to try and get ahead in the polls. Unlike MA’s US Senate candidate Elizabeth Warren who claimed her 1/32 Native American heritage while a professor at Harvard Law School, of which she’s currently on leave, and reason enough for listing herself in the Association of American Law Schools’ annual directory as a minority professor.

While Romney doesn’t have a bloodline to Latino ancestry, he could claim it (by proxy), if he wanted to, since his father was born in Mexico and he still has relatives in Mexico who are Mexican citizens.

Yet, Romney has shied away from communicating with Latinos through Spanish media.

A full year after Romney launched his presidential bid, the campaign doesn’t have a Spanish version of its website, nor has it hired a Spanish-speaking spokesperson. Romney boycotted a primary debate on Univision, leading to the event’s collapse, and, to date, he has only done one sit-down interview on a national Spanish network. The apparent apathy has left Latino advocates — and more than a few Republicans — baffled, wondering whether the campaign has already written off one of the fastest-growing demographics in the country.

The same article correctly reminds readers that given his stance on immigration reform, the DREAM Act and the notion that immigrants need only “self-deport” that an interview with Spanish media might prove to be an uncomfortable hot seat for the candidate but then what could be a truer test of leadership and ability to lead a diverse nation with a growing demographic that will soon be the majority?