Latina Lista: News from the Latinx perspective > Columns & Features > American Dreams > The Saga of Immigrant Youth — the gap between feeling American and becoming American on paper

Next month, the country’s educational community celebrates the 30th anniversary of the U.S. Supreme Court’s landmark decision in Plyler vs. Doe. In Plyer vs. Doe, the high court ruled in June 1982 that it was against the law to prohibit primary and secondary education to an undocumented student. Although the decision has stood for nearly 30 years, attaining higher education for undocumented high school graduates has been, for most, a long, distant dream — a nightmare, even. 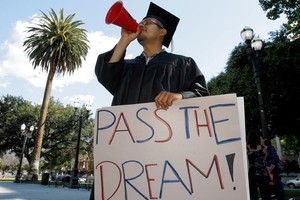 Too often, politics has gotten in the way of common-sense policy. In 2001, a bi-partisan effort led by Sen. Orrin Hatch (R-Utah) and Sen. Dick Durbin (D-IL) resulted in the introduction of the Development Relief for Alien Minors Act, or the DREAM Act.

This legislation, which many had hopes of passing, came to a screeching halt after the September 11th attacks. Since then, officials like Kris Kobach (the Kansas Secretary of State, who’s a key architect of Arizona’s S.B. 1070 immigration bill) have used fear tactics to fuel anti-immigrant sentiment.

A climate of hate, under the pretense that immigrants are criminals, have defined the immigration narrative, especially within the extreme wing of the Republican Party. When the DREAM Act came up for a vote in 2010, it was a Republican filibuster and five Democrats that altogether deferred the dreams of thousands of immigrant youth.

Across the country, students who were raised as Americans — who attend public high schools, who seek to become full-fledged, contributing citizens of the country they call home — live in limbo.

As we mark the Supreme Court’s decision on Plyler vs. Doe, it’s fitting that the DREAM Act and access to higher education are again at the forefront of the contentious conversation on immigration reform. Conveniently enough, the attention also comes in an election year, when both parties seek the Latino vote, which will prove critical, particularly in swing states.

For two years, the GOP has either been silent or shown great apathy on the issue. When asked about the DREAM Act during the Republican primaries, Gov. Mitt Romney said, “If Congress was to pass the DREAM Act, I would veto it.” But a few weeks ago, surprisingly, the silence and apathy was broken by Sen. Marco Rubio (R-FL).

Rubio picked up the flag left behind in the battle field after the DREAM Act vote and began talking once again about education and immigrant youth — and a path to legalization for them.

United We Dream, the largest national organization of undocumented youth, has not dismissed Rubio’s attempt just yet. We are eager to learn the details of his upcoming bill. As the people who are directly impacted by this issue, we appreciate the senator’s interest to listen to our stories. We are thankful for being asked for our ideas on what the legislation will say, and are glad to see the Senator reaching out to our long-time champion on this issue, Senator Durbin.

To some, this outreach may seem like nothing more than a political calculation for a man who has higher ambitions. Rubio’s name, after all, has continually topped Romney’s vice-presidential wish-list. But it cannot be overstated that Rubio, the son of Cuban immigrants and a first-generation American, understands that the Latino population cares deeply about this issue. He also understands that the country as a whole wants to find a solution to this problem.

Immigrant youth are not beholden to one party. We’ve mobilized, organized and negotiated with both parties. With many risks, we’ve created our own stage. Now that we have the public’s attention, we are challenging Republicans and Democrats and President Barack Obama.

Four years ago, under the banner of hope and change, he promised to take on immigration reform during his first term. Though the Department of Homeland Security has offered some failed attempts of relief, through prosecutorial discretion, the Obama administration has also deported the highest number of immigrants in the history of the United States.

But Obama can also execute the power he holds in his hand — the power to stop the deportation of immigrant youth and grant them temporary relief, while Congress addresses the issue in a more complete and lasting way. After all, the Obama administration has increasingly been using Executive power under the slogan “We Can’t Wait”.

We will continue to push for the President to take action.

Sitting through my American history honors and AP classes, and learning the basis and foundation of this country, I’ve learned that the road to justice, though arduous, is one that America has always found. Immigrant youth, like myself, fervently ask for an opportunity to adjust our undocumented status so that we can then serve and participate fully in our communities.

I graduated college in 2005; since I haven’t been able to work because I don’t have papers, I went back to school and earned two other degrees, one of which is in special education. I love children. My deepest desire is to one day be in a classroom teaching elementary-school children with Down Syndrome and autism so that they too have a voice — that they, too, matter in this country.

We are hopeful that the gap between feeling American and becoming American on paper soon becomes a reality. In the meantime, trendsetters and pioneers of education in this country, like Dr. Eduardo Padrón, President of Miami Dade College, understand the importance of ensuring that immigrant youth, who are part of the fabric of this nation, have an opportunity to receive an education.