LatinaLista — As the 2012 Democratic National Convention gets started tonight, the American people have a pretty good idea just how polar opposite are these two parties. 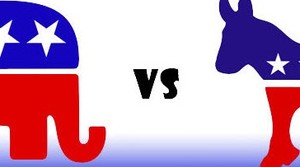 The best measure of these differences can be found in the party platforms. Though last week some Republican pundits and Romney campaign workers were trying to distance themselves from some of the more extreme language of the 2012 GOP Party Platform — and even claimed that the party platform holds very little sway over Romney’s personal beliefs, the fact of the matter is that any platform reflects the at-large membership’s views on issues.

A president may not adhere to the language of the platform but it’s understood that he better adhere to its spirit or he will find himself facing an angry party — and no sitting president wants that for himself or his administration.

Today, the Democrats released their party platform and, as expected, no surprises. The only real surprise is just how different it is from the Republicans’.

Each platform distinctly envisions a different future for America but each also seems to be addressing a different group of Americans as well. Instead of having a vision that foresees a country unified, each party has to take responsibility for doing their fair share of dividing the country.

To see just how stark some of the differences are between the parties, the Voice of America published a good summary of side-by-side comparisons of party platform stands. There’s no mistaken that a line in the sand has been drawn on many issues.

Democrats:
-Support “marriage equality” and efforts to secure equal legal treatment for same-sex couples.
-Support full repeal of the Defense of Marriage Act, a 1996 measure defining marriage as a union between one man and one woman.

Republicans:
-Support the Defense of Marriage Act.
-Back the rights of states and federal governments not to recognize same-sex relationships licensed in other jurisdictions.

Republicans:
-Support a “human life amendment” to the Constitution.
-Oppose use of public revenue to promote or perform abortion or fund organizations that do so.

Democrats:
-Want comprehensive immigration reform that would bring undocumented immigrants “out of the shadows,” requiring them to “get right with the law, learn English and pay taxes” to be considered for citizenship.

Republicans:
-Oppose any form of “amnesty” for those who “by intentionally violating the law” when entering the United States “disadvantage those who have obeyed it.”

And where does that leave the vast majority of Latinos who don’t enjoy steady employment, a college degree or legal status?

For the vast majority who still hold the disappointing distinction of being uninsured, unemployed or underemployed and undereducated, one party makes it clear that they will help, perhaps to the detriment of the nation’s deficit, but the other party goes to the other extreme. They want to balance the budget on the already stooped backs of people for whom poverty puts their lives at risk every day, whether it be by keeping a roof over their heads, food on the table, a job to be had or the opportunity to be seen by a doctor.

Whoever is the next President there is one thing certain — he holds the fate of the majority of Latinos in his hands.

The difference will be one may see that fate as nothing more than a destiny for Latinos and other may see it as opportunity.