LatinaLista — The clock is ticking to tonight’s CNN/Tea Party Republican presidential debate. Already, pundits are speculating on what the headlines will be tomorrow morning from tonight’s debate. All are itching to see how the candidates talk about Social Security since TX Gov. Perry has made some radical statements on the issue. 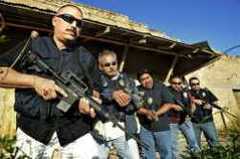 Yet, there’s another issue that Perry has made some pretty radical comments about and they haven’t generated anywhere near the pushback from his political peers — and that’s a shame.

Where there’s no pushback means there’s pretty much agreement.

It’s his description of the Texas-Mexico border where, according to Perry, is a no-man’s land with cartel violence overtaking southern Texas. Writing about this over-exaggeration before, I am constantly appalled that people, who should know better, aren’t using their common sense when they hear comments like this.

If cartel violence really has infiltrated the US border would people still be calmly living their lives, going to work, school, raising their families, starting businesses, etc. if they were under constant attack?

No, but because it makes good political campaign stumping and makes them sound tough on foreign policy, Perry and his peers continue with the same rhetoric — no matter how misleading or untruthful it is.

Well, come to find out, politicians aren’t the only ones who think misrepresenting the truth about the border makes for a good way to attract attention — so do reality shows.

Knowing that Laredoans don’t travel over the international bridge to Nuevo Laredo, Mexico as freely as they used to, especially after dark, I was expecting the press release for this new series to make reference to that.

They did — and more!

According to the press release:

Laredo, Texas is under siege. The small city on the U.S.-Mexico border is overrun by the sophisticated and large-scale trafficking operations of Mexican drug cartels…

The largest inland port on the U.S.-Mexico border, Laredo is the premiere gateway used by Mexican drug cartels to transport illegal narcotics into the U.S. and export billions of dollars in cash to Mexico.

“Bordertown: Laredo” gives viewers exclusive access to the explosive drama, violence and conflict that unfold daily along the U.S.-Mexico border through the unique perspective of five Mexican-American cops determined to take back their community.

The press release makes it sound that people in Laredo are reliving the days of the old West. When in reality, people are living pretty normal lives.

Contrast the A&E press release with the latest one issued by the city of Laredo:

Wanting kids in his district to have one last summer party before heading back to school, Cm. Perez is hosting a free bash that will incorporate the best of summer activities for the kids, while helping the parents get them ready for back to school. The event will feature a water slide, moonwalk, baseball drills, basketball court and other fun water and safety activities. Adults 18 and over only can play loteria-style Bingo to win school supplies, one card per player. Free fajitas, hotdogs, popcorn, soda and water, while supplies last, will be given out, but families are encouraged to bring picnic set-ups, as well. Music and entertainment will be provided by Border Media’s Hot 106.1; La Ley 100.5 and Digital’s 107.3 FM, who are helping to present the event.

A back-to-school bash amid the gunfire and all-out warfare that happens in a city under siege?

Curious as to what the mayor of Laredo, Raul Salinas, thought about the press release, Latina Lista sent a request by e-mail for his response. Here it is:

We recognize that the marketing team at A&E had a job to do when developing a marketing campaign for the show, so that it would stand out from the hundreds of other reality shows out there, in an effort to get viewers interested in watching the show.

We believe, however, that once people begin watching the show and see the reality of Laredo, our amazing and dedicated Laredo Police Department narcotics unit and the work they are doing that keeps Laredo – and the rest of the nation – safe from drug dealers and others who would wish to do us harm, they will come to know and understand the true Laredo: the city with the lowest crime rate in the state of Texas.”