Latina Lista — President Obama surprised many when he reversed course on stopping the EPA from enforcing tougher smog standards. 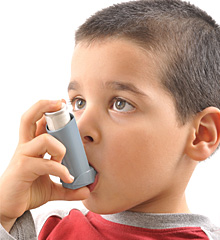 Environmentalists were outraged and according to today’s Guest Voz contributor, Adrianna Quintero, so should be the Latino community.

Quintero is an environmental advisor of Voces Verdes, a Latino green coalition. In the following piece, Quintero outlines why President Obama’s reversal isn’t just a disappointment but helps to prolong a real danger to Latino families and communities.

Latino children across the country will be at higher risk for asthma attacks, bronchitis, and lung disease, thanks to a shocking political move by President Obama this past week.

Rather than choose stronger smog standards that would have saved tens of thousands of lives, President Obama stepped out to block his own agency from protecting the health of our children.

The president has put millions at risk for respiratory illnesses, all in order to safeguard the billion-dollar profits of the nation’s largest polluters.

Across the United States, Latinos continue to live in areas with the highest concentrations of air pollution. Our community knows the consequences–emergency room visits caused by asthma attacks, missed days of school and work to care for sick children and other family members, and devastating health-care costs, especially for the uninsured.

Ground-level ozone, commonly known as smog, is largely to blame for this suffering.

Smog is formed when pollutants from our cars, trucks, factories, and other sources combine in our air. The combination is deadly.

Even at low levels, smog is known to aggravate asthma, cause respiratory illness, and lead to lung damage for those who breathe it repeatedly. And the consequences are worse for children, whose bodies are more vulnerable to pollution, and who breathe in more dirty air as they run and play.

For Latinos, smog is all too common–nearly 50 percent of all Hispanic-Americans live in counties that frequently violate smog standards, according to the CDC. As of 2008. 4.7 million Latinos had been diagnosed with asthma in their lifetime.

While the Environmental Protection Agency (EPA) currently limits the amount of smog in our air to 75 parts per billion, scientists have unanimously agreed that the standard is too weak–leaving our children, elderly, and other vulnerable populations at risk.

That’s why, when EPA Administrator Lisa Jackson signaled that the agency would move forward in adopting a truly protective clean air standard, parents all over the country eagerly held their breath.

Now, holding our breath might be the safest option.

With the EPA poised to adopt a more stringent standard — and already well past the deadline to do so — President Obama declared last week that he would STOP the agency from even considering stronger smog protections until 2013.

Echoing the claims of the Tea Party and big polluters, the president claimed that the tougher clean air standard would be a burden for our economy.

President Obama’s own agency estimates that a stronger smog standard would save us as much as $37 billion per year in health benefits, in the form of 4,300 lives saved and 2,200 heart attacks prevented each year, among other benefits.

That’s while the new standard would cost the U.S. roughly $20 billion. Even my 9 year-old daughter can do that math. $17 billion in savings each year is certainly a boost our economy could use.

It’s not just Latinos or Latino children who stand to benefit from cleaner air. We all have to breathe, and cleaner air means a better functioning economy, healthier families, and a brighter future for our children.

And that includes the president’s own daughters, who run and play outside in our nation’s capital, which recently received a grade of “F” from the American Lung Association for its smog pollution.

Sasha and Malia are two of the more than 110,000 children living in the region, at risk everyday from the dirty air they breathe.

As a concerned father, our President should aim to safeguard his own children from big polluters and put his daughters’ health ahead of Big Oil and Big Coal.

But last week, we saw him choose polluters over people.

President Obama, as we enter election season, I hope you’ll consider the record 12.2 million Hispanics who are projected to vote in 2012. Groups representing millions of Latinos have already called on you to fix the Bush administration’s costly mistake.

So we ask you again, Mr. President, stand up for the health of our children — YOUR children — and help us adopt strong, clean air standards for smog.
Adrianna Quintero is director of La Onda Verde of the National Resources Defense Council (NRDC) and an environmental advisor to the Latino green leadership organization Voces Verdes.