LatinaLista — Though the economy is showing signs of improving, it’s still slow-going with prices rising faster than peoples’ salaries. No other segment of the economy hits closer to home than food prices. 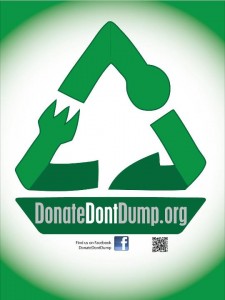 Shrinking wages and extreme weather events have put the squeeze on families in more than one way causing 1 in 5 Americans to go hungry. Yet, restaurants, supermarkets, bakeries, and even families are throwing away tons of edible food.

The Environmental Protection Agency says that about 35 million tons of food waste were generated in the United States in 2010, with over 96 billion pounds of edible food going into landfills each year. Rather than making sure the food finds its way to local food banks or the hungry, it’s more convenient for many businesses to just toss it.

In San Diego, two high school-age sisters saw the extreme food waste and the men, women and children in their community going hungry and decided to do something about it. Sisters Camille and Gabrielle Posard created Donate Don’t Dump.org in 2011.

The mission of Donate Don’t Dump is to encourage grocery stores and restaurants to donate their surplus food. Since food waste is a global problem, the sisters provide training and support for people who want to start new chapters of the organization. Currently, there are 15 chapters at high schools and churches in four states, with people from Spain looking to start a chapter.

The ultimate goal of the organization is to be in all 50 states.

So far, the girls have been the recipients of several awards and both have been named among “top 30 leaders in San Diego County under 30 years old.”