Parents Rally Asking Presidential Candidates – Climate Change: Which Way Will You Lead Us? 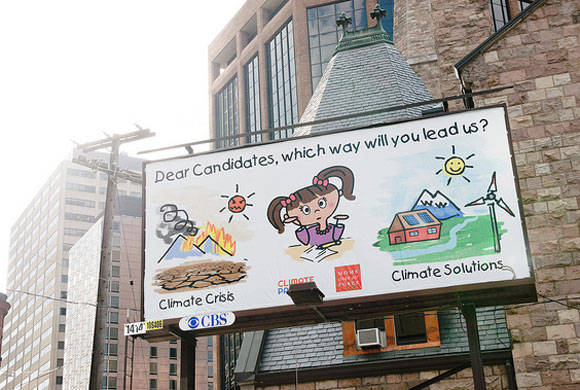 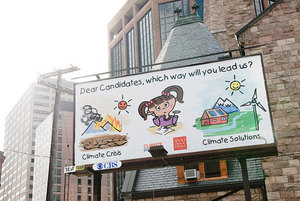 Moms Clean Air Force and Climate Parents billboard asking the Presidential Candidate’s their plans to tackle the climate crisis and lead this country into a new era of energy-efficiency.

We were so excited when the team at Climate Parents approached Moms Clean Air Force and asked us to co-sponsor a rally and billboard in Denver before the first Presidential debate. Our collective goal was to send a strong message that parents want to know what the Presidential Candidate’s plans are to tackle the climate crisis and lead this country into a new era of energy-efficiency. Lisa Hoyos, from Climate Parents graciously provides a wonderful recount of the event:

On Monday afternoon, two days before the Presidential debate, dozens  of Colorado parents and kids gathered in the heart of downtown Denver  to call on the presidential candidates to explain their plans to  reduce fossil fuel emissions, rapidly scale up clean energy, and  protect our children from the climate-change fueled fires, floods, and  storms that are increasingly wracking our nation. The rally, sponsored  by Climate Parents and Moms Clean Air Force — and supported by  groups like the 350.org action fund, the Alliance for Climate  Education, and the Sierra Club — featured the unveiling of a colorful  billboard picturing a young girl asking presidential candidates,  “Which way will you lead us?” — toward climate crisis or  climate solutions?

As a parent of a four and a seven year-old boys, climate change looms  large in my mind as a serious threat to their future. I’ve  talked to enough parents who feel the same way to understand that  we’re a constituency primed to be more actively engaged in  fighting climate change. Standing underneath our billboard in Denver,  I felt a strong sense of hope and possibility, mostly inspired by the  wisdom of the kids participating in our event. A Colorado high  school senior, Tehya Brown said, “As a first time voter, my  vote will go to the candidate who displays the greatest and most  genuine concern for clean energy, sustainable jobs, and environmental  education.” 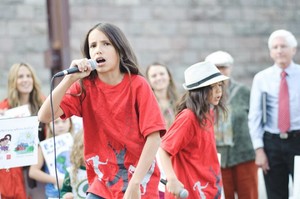 “The survival of our generation is at stake because of the lack of action
on climate change.” ~ Xiuhtexcatl Martinez, 12 yrs old

Her sentiments were echoed by Xiuhtexcatl Martinez,  whose climate activism career spans half of his twelve years. He  crystallized the message of our rally when he said, “The  survival of our generation is at stake because of the lack of action  on climate change. Neither of the candidates are taking climate change  seriously, and it’s the biggest threat we face as a human  race.” After throwing down that level of wisdom, Xiuhetexcatl  and his little brother Itzcuauhtli proceeded to perform two climate-themed rap songs  they wrote themselves.

While the emotional power of these young people’s voices was  unmistakable, our gathering of parents and kids was not short on  political analysis. We talked about the billions of dollar spent by the coal and  oil lobbies to keep us dependent on oil and gas, and to slow the shift  to clean energy that our country and our climate so desperately need. We  talked about this corporate influence being a prime reason that  Governor Romney mocked even caring about climate change in his  convention speech. And we discussed why President Obama—who clearly  understands the threat it poses–still promotes an “all of the  above” energy strategy that includes expanded oil, gas  drilling and even so-called “clean coal.”

Anyone who has spent time in Colorado this year knows that the dangers  of climate change are here and now. Which is why, Pamela Campos, a representative of  Moms Clean Air Force, while holding her three-year-old, aimed a  question directly at President Obama and Governor Romney, saying,  “My son and I watched the fires burning our mountains in  August. From one mother to two fathers, what will you do to protect  our mountains?”

Peter Sawtell, the father of a grown son and an ordained minister who serves as the Executive Director of Eco-Justice Ministries, told the  crowd, “People always say we should think about what kind of  world we want to leave to our kids. We need to flip the premise and  ask what kind of world do our kids have the right to expect from  us?…I will vote for the candidate who demonstrates he really takes that question seriously.”

It’s fair to say that everyone over the age of six who rallied  at our billboard knows that we’ve got an uphill battle on our  hands, and that our success depends on a sense of urgency at every  level of government. We also acknowledged that we’re still  waiting on the Presidential Candidates to outline their comprehensive  plans to fight climate change. The debate cycle gives them  three opportunities to accomplish that task.

In the meantime, Climate Parents, Moms Clean Air Force and our allies  will keep keep pressing the candidates to  give us their plan to end the climate crisis. It will only work if thousands join us, so please add  your voice and help us build a base of parents large enough and  powerful enough to move the political needle on climate change.

Thank you, Lisa. And thank you to everyone who helped make this incredible event a success! Please help us ask the candidates how they would tackle the climate crisis and lead us into a clean air future. 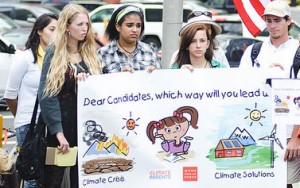 We urge you to sign these two petitions right now:

CLIMATE PARENTS: Tell the Candidates: Our Kids Deserve to Hear a Plan for Fighting Climate Change