Latina Lista: News from the Latinx perspective > Columns & Features > Global Views > The Other Honduras: Garifuna Culture on the North Coast

The Other Honduras: Garifuna Culture on the North Coast 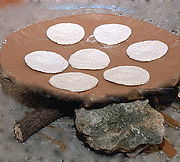 It’s crazy-hot in the little casita where Garifuna women cook. It’s even hotter over by the wood cooking stove, where they grill ground yucca into the giant wafer-like tortas that are a mainstay of the Garifuna diet.

Mirna Ruiz is chief cook and president of the Binadu Uwenedu women’s cooperative in Ciriboya, Colón. The little co-op produces 2,000 of the crisp wafers every month, most to be packaged for sale in the cities of Honduras to Garifuna people far away from their home communities on the Caribbean coast.

In Honduras, Garifuna coastal communities run from Puerto Cortés in the north to the sleepy little village of Plaplaya, in the Moskitia region not far from the Nicaraguan border. I spent a week traveling through coastal Colón and the Moskitia earlier this month; where my first up-close glimpse of Garifuna culture was one of the many pleasures of the trip.

The Garifuna are descendants of Caribs, indigenous Arawaks from South America, and West Africans initially brought to North America in the 17th century as slaves. They have their own language, their own religious beliefs (Catholicism with a twist), a collective sense of how their communities should function and a laid-back way of living that gets the job done without expending unnecessary energy.

And they’ve got yucca, which they call kasabe.

Yucca grows easily and well in the sandy coastal soils that generations of Garifuna have called home in Honduras and in other Central American countries. Tear a chunk of yucca root straight out of your garden and it’s all set to add to the garden of a neighbor ensuring that no one ever runs out of yucca.

The Garifuna cook the potato-like tuber in various ways: Fried; grilled; stewed; used in soup. But they also like yucca when it’s ground, dried and grilled into thin, crispy wafers, which are as popular an accompaniment to a Garifuna meal as corn tortillas are elsewhere in Honduras.

The grinding stage is fast now that the group has a motorized grinder, acquired a couple years ago as part of an internationally funded project to help the co-op develop. The machine grinds in 10 minutes the same quantity of yucca that it used to take the women 14 hours to do back when the work had to be done by hand. The pulped yucca is then put into a press to squeeze out excess moisture, and ends up as a kind of coarse flour ready for grilling.

The women’s cooperative in Ciriboya got its start 12 years ago, first to sell tortas in the neighborhood and eventually developing into a small export business aimed at Garifuna who have left their coastal communities but don’t want to give up a favorite food. Some 15 women now belong to the co-op, and all participate directly in some aspect of the torta-making process.

That’s the job of Mirna Ruiz, who spends her work days grilling the big tortas for the co-op over a wood fire. They burn easily, so it’s a process of constantly whisking the bits of flour around to make an even wafer, smoothing the edges into a perfect circle, and then flipping the whole thing over at just the right time.

Mirna’s tortas are straight-up yucca and nothing more, but one of my co-workers later tells us that some people add flavoring to the yucca before it’s cooked — cocoa, garlic, butter, other spices.

It’d be a stretch to suggest that the mere act of grilling kasabe over a hot wood fire means Garifuna culture is unchanged. Cell phones, propane stoves, fashion-conscious clothes, beer and even shiny Nissan 4×4 trucks (in a community with no road access) were all in evidence in our brief travels through communities in the Moskitia.

But the fundamentals of the culture — the language, the way the community functions, the lifestyle, the food — continue as they have for centuries. The men fish, the women do the rest of the household functions. The communities are still matriarchies. Children, chickens and dogs of the village roam free.

Not that life is easy, mind you. It’s difficult and expensive in the Moskitia to travel to the nearest urban centre — Tocoa — for goods. And it’s hard to buy goods unless you have money, which is also in short supply in the isolated communities. Jobs are hard to come by, and it’s not easy to resist the temptations of the lucrative cocaine industry in the area (the waters of the Moskitia are the first landing point for cocaine coming out of Colombia).

But all the things that make the region difficult have perhaps also made it a little harder for traditional cultures to fade away. Step into a Garifuna village in the Moskitia and you know immediately that you’re somewhere else — mere kilometers away from a neighboring town with a more traditional Honduras feel, perhaps, yet so very different.

They’ve got a distributor in La Ceiba now, and the country’s Pizza Huts have begun buying the tortas to use in the chain’s salad bar. But the co-op is currently producing more tortas than there is market, and they need more buyers. They’re also in competition with four other Garifuna women’s co-ops in the same region, all counting on new markets outside of Honduras.

Those differences are one of the reasons the Ciriboya women’s co-op believes there’s a lot of market potential for their tortas. The home-grown yucca, the grinding, the specially designed wood stoves for cooking the yucca tortas — well, they just don’t have all of that elsewhere in the world.

What better way to reconnect with migrant Garifunas in other cities and countries than to provide them with a taste of home?

Mirna pulls a fresh torta off the wood stove and breaks it apart for us to try. It reminds me of a rice cake, or maybe those big discs of “hard tack” that the family of a Finnish high-school friend of mine always had around.

I feel my own West Coast cultural conditioning kicking in, and imagine the fresh yucca wafer with a nice bit of smoked salmon on top. Perfect.

Note: The author is a former journalist from Canada. She currently lives in the town of Copán Ruinas, Honduras, and volunteers with Cuso International, a Canadian development agency that matches skilled professionals to organizations in developing countries. She writes a blog called A Closer Look.

featured, Garifuna, Guatemala, yucca tortas
Previous Post Condor Book Tours to Partner with Latina Lista
Next PostIt must be the year of the Latino: AP announces it's dropping the 'i' word

Condor Book Tours to Partner with Latina Lista
Comment
It must be the year of the Latino: AP announces it's dropping the 'i' word