Latina Lista: News from the Latinx perspective > Latino Politics > Guest Voz: Only one out of the four GOP presidential nominees has it right on illegal immigration

Guest Voz: Only one out of the four GOP presidential nominees has it right on illegal immigration 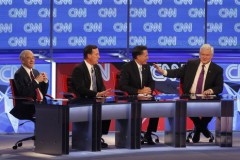 LatinaLista — These days, politics is a divisive issue. There’s no getting around that. In the Latino community, emotions run particularly high between Latinos of different political parties, mainly because of the GOP leadership’s stand on illegal immigration.

However, not all Latino GOP members agree with their leadership and more have started to speak out. One group is the Cafe con Leche Republicans based in Minnesota. With the tagline “Republicans for an America that welcomes immigrants,” Cafe con Leche members have definite feelings about the direction of their party.

In the following opinion, the president of Cafe con Leche Republicans, Bob Quasius, Sr., delivers his thoughts on last night’s GOP presidential debate in Arizona — delivering an endorsement in the process.

Tucson, Arizona – After watching the Arizona presidential debate, we’re very disappointed that three of the four candidates are clearly tone deaf on immigration. This does not bode well for the GOP in the general election, as their comments and clear lack of practical solutions will help Obama with New Americans. Immigration is not the #1 issue, but ranks a close #2 among Latinos, according to recent polls.

Arpaio’s policing model is a proven failure. Crime, particularly violent crime, has skyrocketed in areas patrolled by Arpaio due to massive diversion of resources to immigration enforcement, while crime rates fell everywhere else in Arizona. In one community alone,432 sex crimes went uninvestigated due to lack of resources and leadership. The federal government already has the 287(g) program to empower state and local police to enforce immigration laws, and 287(g) is problem plagued, according to ICE’s Inspector General.

A recent DOJ investigation, using Arpaio’s own traffic stop records, found Latinos are 4-9 times more likely to be stopped by Sheriff’s deputies, and 20% of the stops lacked probable cause, in other words ‘driving while brown.’ Now Arpaio wants the rest of Arizona and nation to follow his failed policing model, throwing the civil rights of 50 million Hispanics ‘under the bus.’

The candidates claim Obama isn’t enforcing immigration laws, when in fact immigration law enforcement and deportations have dramatically stepped up, and our ‘deporter-in-chief’ sets new records for deportations. The immigration court system and detention facilities are already straining at capacity, so more immigration enforcement without addressing other aspects just worsens the problem, and damages whole sectors of our economy such as agriculture.

Ron Paul claims illegal immigration happens due to the welfare state, yet undocumented immigrants have been barred for decades from welfare, and numerous audits in multiple states consistantly failed to find a problem with undocumented immigrants collecting welfare. You’d think as a libertarian Paul would grasp that our current immigration system is a failed progressive solution, and free markets largely determine immigration levels, not government quotas. Ron Paul is clearly a ‘crypto-libertarian’ when it comes to immigration.

The best way to stop immigrants from crossing our borders seeking work in the U.S. is to provide them a line to stand in for visas. For most immigrants, there never was ‘a line to stand in’, but there are jobs here that most Americans don’t want. Newt Gingrich is the only one of the four who fully grasps the problem.