Latina Lista: News from the Latinx perspective > Latino Politics > Immigration on the table for 2013, Obama must take the lead

Immigration on the table for 2013, Obama must take the lead

Immigration reform is alive and well for the 113th U.S. Congress.

After a ‘shellshocked’ defeat that reelected President Obama, the GOP is reckoning with the fact that the road to the White House inevitably, goes through the barrio. 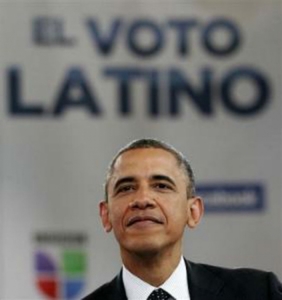 Among Latinos, Obama trumped Romney by a whopping 52-point, the largest in recent history, according to an ImpreMedia/Latino Decisions poll. Only 23 percent of Latinos backed the former Massachusetts governor.

The President’s overwhelming support from Latino, blacks, Asians, and college-educated women, the so-called “coalition of the ascendant” has led political observers to note the political landscape has forever changed. Obama is the first president to win the White House while losing the white vote. Among white males it was only 1 in 3.

Hispanic-voter turnout inched up to a record-high 10 percent despite fear that it could be lower than 2008, in part, to voter suppression laws in battleground states.

And the giant has made it inevitable for both parties to ignore comprehensive immigration reform for the estimated 11 million people. Pundits, advocates and activists are optimistic that immigration reform will be among the top priorities in the next Congress.

“…In the coming weeks and months, I am looking forward to reaching out and working with leaders of both parties to meet the challenges we can only solve together,” Obama said in his Nov. 6 victory speech in Chicago.

“Reducing our deficit; reforming our tax code; fixing our immigration system; freeing ourselves from foreign oil. We’ve got more work to do,” he added.
Rep. Luis Gutierrez, a Democrat, who has long pushed for immigration reform vowed to push even harder.

“There is pressure on Republicans to change their tune but there is also pressure on Democrats to deliver. Latino voters put a lot of faith in President Obama. And he has another four years because of that faith.” Gutierrez said.

“But now he has to exert the muscle needed to forge the coalition of mostly Democrats and a few Republicans to get a bill passed and implemented.”

To that end, House Speaker John Boehner (R-Ohio) handed Obama and the White House and olive branch Nov. 9, saying in a press conference that he supported a “common sense, step-by-step approach that would secure our borders, allow us to enforce the laws, and fix a broken immigration system.”

The president, he said, had to take the lead.

Café con Leche Republicans, an organization that pushes for conservative GOP values agree. Its president Bob Quasius said that a reform could be reached only if Obama took steps to “mend the demagoguery that hindered progress” during his first term.

“Obama needs to make the first step and put things on the table. He needs to sit down with Congress and not make comments that put off any bipartisan support,” Quasius. New talks on immigration could not be achieved with the rhetoric of the first Obama term, he said.

That kind of touting, Quasius insisted, won’t work. The majority of Republicans support immigration reform, including one that has a path to permanent legalization, Quasius wrote in a Tucson Citizen column. Citing a 2011 PEW Research poll showing that even among staunch conservatives there is a 49/49% split on immigration reform, Quasius was optimistic about a possible bipartisan collaboration.

With momentum swelling behind comprehensive immigration reform, the United We Dream, a coalition of DREAM Act students pushing for the broad immigration reforms, vowed to continue pressing for a permanent solution not only for themselves, but for the millions of families currently living in fear of deportation.

(Luis Carlos López is a Phoenix-based freelance writer. He can be reached at lclopez4@gmail.com.)