LatinaLista — To paraphrase a popular saying: As the well-being of Latino children goes, so goes the nation.

It’s an understatement to say that the future of the nation depends, in large part, on how well today’s Latino children are prepared for it. They’re a demographic who will fulfill today’s predictions of a Latino majority in the country; they already are in a lot of urban school districts. 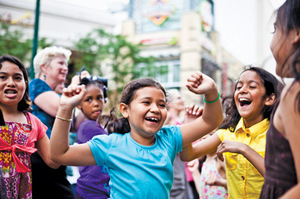 Unfortunately, with one-third living in poverty and only 63 percent graduating from high school, the prospects for the nation’s future aren’t promising unless some major changes are made to address the shortfalls that exist among low-income Latino families.

While it’s true that the federal government can only do so much by funding various programs, it’s the states and local communities that can be more effective in turning the tide of Latino achievement for the low-income if they knew exactly what the problems were and how they compare to other cities and states.

Today, the National Council of La Raza made that monumental task easier. They released the Latino Kids Data Explorer. The online site uses data from the Population Reference Bureau and Child Trends that monitors 27 factors on child well-being. It then focuses data results for Latino children.

The “Latino Kids Data Explorer” provides state-by-state information on how Latino children are faring in terms of poverty, teen pregnancy, maternal education, access to health insurance, high school graduation rates and more, allowing comparisons between states and revealing how these children’s ability to succeed as productive members of society is influenced by these factors. For example, one-third of all Latino children in the U.S. live in poverty, and that number is rising. In 2010, Latino children made up 35 percent of all children living in poverty, compared to 28.4 percent in 1999.

The free online tool is easy to use for anyone, from policymakers and activists to curious citizens and students, who have an interest in seeing what the data says about the real state of affairs for Latino children.

“One of the most alarming trends in the data we reviewed is the growing number of Latino children living in poverty. Given the disproportionate impact of the recession on Latino workers and the fact that poverty can often carry over from one generation to another, it is increasingly important that we help low-income Latino families and give future generations the opportunity for a better life,” said Patricia Foxen, Deputy Director of Research at NCLR.