LatinaLista — One of the least contentious elements being proposed as part of a larger immigration reform package has to do with creating a guest worker program to serve the agricultural industry. 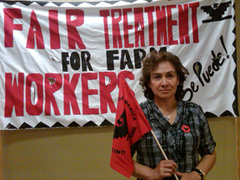 The reasoning is that such a program would provide more security to undocumented farm workers who are subject to an untold number of abuses by unscrupulous employers who only want cheap labor.

Yet, truth be told, it’s not just the undocumented farm workers who are subjected to such abuse. It’s been common knowledge that all farmworkers have been victimized by agricultural businesses that value the product more than the lives that get the product picked or harvested.

The United Farm Workers (UFW) have been tirelessly fighting on behalf of farm workers who died from not receiving enough breaks in the shade or water during the workday or were subjected to sexual harassment, pesticide exposure or a number of other preventable deaths, injuries or injustices.

Finally, the California state legislators got the message that these workers needed protection and passed the Fair Treatment for Farm Workers Act (SB 104). It now goes to California Governor Jerry Brown’s desk to be signed.

The UFW wants to impress upon Gov. Brown that it’s imperative he sign the bill to help farmworkers. To help relay the message to Gov. Brown, the UFW is asking people to sign a petition showing support for the SB 104.

In the meantime, the UFW is organizing a bus caravan filled with farmworkers to deliver the bill personally to Gov. Brown for his signature:

On Thursday, June 16 we will present Governor Jerry Brown with the most important reform legislation for farm workers in a generation, the Fair Treatment for Farm Workers Act (SB 104 — Senator Steinberg).

Close to 800 farm workers from throughout California want to go to Sacramento and personally hand deliver the bill to Gov. Brown.

They will travel from as far away as Oxnard and the Coachella Valley. Almost everyone will have to take an unpaid day off work. Some will even be risking their jobs to attend.

They are risking their jobs to help save the lives of fellow workers who face the danger of heatstroke from a lack of water and shade this summer. They are going without the day’s work to help the women who are afraid to report their foremen’s sexual harassment.

They will do whatever they have to get this bill signed so that farm workers can have a tool to protect themselves from grower abuses and indifference.

In addition to the petition, the UFW is asking for donations to help send the farmworkers to meet with Gov. Brown.

To send at least 13 busloads and several vans of farm workers to Sacramento there are expenses. Transportation and food alone for the 800 farm workers traveling on June 16th will cost $30,793 or $38.48 per worker.

Can you make a donation today to make sure workers can have a seat on the bus and make history?