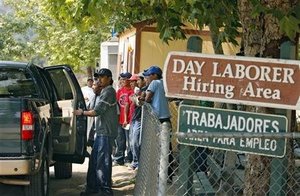 One driver, a blonde, spiky-haired Caucasian-American, steps out of the truck and walks towards some day laborers waiting in the back lot.

“Who speaks English?” he yells. The driver chooses two men who raise their hands.

The workers follow the man and hop into the front driver’s seat. The truck rolls out of the lot. A few moments later, the other rental truck pulls up near the bus stop next to the gas stations. The driver signals two men to join him. Like the men in the first truck, the trio disappears down a street known for its busy 7-day-a-week traffic.

It’s a scene that continually repeats itself on a daily basis on this corner and thousands like it where day laborers wait for that next job.

These particular day laborers — all men — begin their day as early as 6 a.m. and end it as late as 5 p.m., if they’re lucky enough to be chosen for jobs ranging from roofing, fencing, landscaping, painting apartments and furniture moving to helping build swimming pools, garages or restaurants.

But to these men, who must rely daily on total strangers for their livelihood, it’s all just business. A business that is as unpredictable as the jobs offered.

Some of the day laborers are undocumented immigrants who arrived from Mexico, El Salvador, Guatemala and Cuba. Others show up at this corner just to make some extra cash — when they can.

One man, who became a US citizen three years ago and chose to remain anonymous, said some workers are lucky to have two days of work during the week.

Long-time day laborer Jose Alfredo Romero Rodriguez agrees and says that though the types of work have remained the same, the pay is getting lower.

“Sometimes we are getting paid $7 for helping people move,” he said, while a truck filled with lawn mowers and weed whackers pulled in and picked up another day laborer.

Rodriguez, who came from Monterrey, Mexico in 1999, said he recently helped construct a Family Dollar store in Oklahoma, where he spent nine days working from 7 a.m. to 7 p.m. For that, he claims he only received $500, or an average of $56 per day.

He said that he received a call from the same company and they wanted him to help build another Family Dollar store in Corpus Christi, Texas, but he turned down the offer.

These days, it’s the small moving jobs that continue to be the most popular ones that need workers, Rodriguez said.

However, experience teaches day laborers not only what is fair pay for certain jobs but what kind of payment to expect from some prospective employers — based solely on their ethnicity.

In some corners, it’s called racial stereotyping or considered politically incorrect. For these men, it’s a way to temper their expectations.

According to Rodriguez, the men chosen by the white moving company driver will more likely receive higher pay, breaks, food and water because, at the moment, most white American “employers” give the most benefits in this business.

“The white Americans pay us $10, while the Indians (Indian-Americans) pay us $8 and Koreans $7,” said Rodriguez.

“White Americans give us food and water, while others don’t give us breaks, food or even water on a hot day,” Rodriguez complained.

According to “El Morro,” a day laborer whose traveled from nearby Irving, Texas and chose to give only a nickname for this report, said that white Americans and some Hispanics pay them $10 and up.

However, he says not all Americans or Hispanics treat them well and it can cause for a stressful day.

“They tell us what to do next without letting us finish the first task,” El Morro says.

El Morro also has had different experiences working with various ethnic employers. He said while Chinese Americans treat them to eating out at restaurants, they can deduct around $400 from a monthly pay of $1200.

He says that he’s also worked with other ethnicities such as Israeli Americans and Russian Americans and said he receives decent pay, but the latter gives them no time for water breaks.

Fear, cheating employers part of the risks of the job

While the amount of pay can be a sticking point, Rodriguez and El Morro claim to be more bothered and afraid by what some employers choose to do to workers — not return them to their original location.

“At times, some will pick you up and later drop you off at a far-away place and not pay you,” Rodriguez revealed.

Given the amount of fear some undocumented immigrants feel about reporting emergencies or crimes to the police, many won’t report that they’ve been cheated out of their wages. In fact, Rodriguez and others say that they do not feel safe when local police show up.

“I feel intimidated by the police presence in my area,” Rodriguez said.

Yet, even with all of their uneasiness, whether from the police or people wanting to hire them, these men and others continue waiting on street corners and back lots seeking employment.

The reason is simple. In these economic times, everybody is after the same job — survival.

Latina Lista contributor Alain Castillo is based in Dallas, Texas.