LatinaLista — While the national debate rages about arming teachers with guns and putting more police officers on school campuses to thwart anymore mass school murders, one school district has entered into a first-of-its-kind partnership with its local police department for the specific mission of putting a halt to criminalizing students. 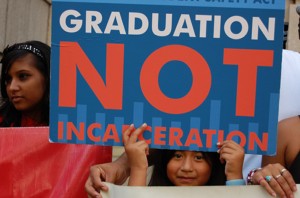 The Denver Public Schools and Denver Police Department have signed the 2013 Intergovernmental Agreement (IGA) that makes it harder to suspend students for minor infractions or disruptive classroom behavior. In Denver public schools, teachers can no longer call on one of the 15 School Resource Officers (SRO) assigned to the district’s campuses to take a student into custody for talking back or not following classroom rules, a practice that is found in school districts across the country and has resulted in the over disciplining of African American and Latino students.

Black students are more than three-and-a-half times as likely as white students to be suspended or expelled, according to the Education Department’s Office for Civil Rights’ survey, known as the “Civil Rights Data Collection.” More than 70 percent of students arrested in school or handed over to law enforcement were black or Hispanic.

The Denver IGA began as a grassroots initiative with youth and parent leaders from Padres & Jóvenes Unidos, a Denver-based organization that has been working to end the school-to-prison pipeline in Colorado for over a decade.

The IGA isn’t calling for less SROs on campus but is requiring a fundamental change in how SROs handle student behavior problems. The IGA calls for SROs and school principals to take three 2-hour training classes a year which will include: “child and adolescent development and psychology; age-appropriate responses; cultural competence; restorative justice techniques; special accommodations for students with disabilities; practices proven to improve school climate; and the creation of safe spaces for lesbian, gay, bisexual, transgender, and questioning students.”

In addition, Ricardo Martinez, co-director of Padres & Jóvenes Unidos, told reporters on a morning telephone press conference that officers will also receive training on recognizing and dealing with their own racial and bias attitudes.

Yet, one of the major objectives of the IGA is that the teachers, principals and SROs cannot criminalize students by arresting them for what would be considered a discipline problem rather than a true crime. The creators of the initiative say the overall intention of the agreement is to minimize the use of law enforcement intervention in their schools.

Tori Ortiz, a student at College Education Center and a participant of the telephone press conference, said, “This agreement allows kids to be all that they can be. It blew my mind when I saw police take kids away from learning for minor offenses.”

The IGA also calls for parents to be notified as soon as possible when their children are ticketed or arrested and that students can only be questioned when it has the least impact on their schooling. In other words, students can’t be taken out of class to be interrogated if the accusation is a minor disciplinary problem.

The IGA is good for five school years, starting with the 2012-2013 school year. However, after the first year, the school district may renew the IGA for four additional one-year terms by providing written notice to the city and the city agrees to extend the program.