Latina Lista: News from the Latinx perspective > Columns & Features > BlogBeat > A few words about Love Thy Neighbor, Mexico: Getting American drug users to connect their usage with violence in Mexico

A few words about Love Thy Neighbor, Mexico: Getting American drug users to connect their usage with violence in Mexico

A little over a year ago (maybe more, maybe less…my memory is like a sieve), I was asked to serve on the Board of Advisers for an organization out of Stanford University called Love Thy Neighbor, Mexico. 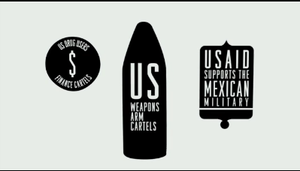 In a nutshell, their goal is to educate people between the ages of 18-30 that American drug use/demand is one of the primary and immediate causes of the violence in Mexico. College kids are one of their largest target audiences, mostly because many use marijuana, and are more prone to experiment with drugs during that time frame.

I had no problem saying yes right away to supporting their organization, and trying to get their message out whenever possible. They have a Facebook page with almost 20,000 likes, a great website with lots of good information, and you can even follow them on Twitter at @LTN_Mexico.

My interest in their cause was rekindled last night during a conversation I had with someone, who astutely pointed out that most American drug users don’t make the connection in their minds between their drug use and the drug war.

It’s very frustrating for someone like me who reads about the brutal violence and cruelty on a daily basis, and it makes me ask (to no one in particular), Where do these people think their drugs are coming from? And where do they think their money is going?

That’s the problem: they don’t think.

I did a podcast several months ago with the head of Texas NORML (the National Organization for the Reform of Marijuana Laws), who made the very interesting comment that NORML encourages its members to “buy local,” meaning to buy their marijuana from US growers, not the dope that comes from Mexico.

While I think this is great, I know even that is a challenge for many. American-grown marijuana is often higher quality (i.e. higher THC content and seedless) than the Mexican imported stuff, but it’s usually more expensive. Many marijuana users here aren’t connoisseurs, don’t want to pay a lot of money for their dope, and often just use whatever their friends have on them.

So, for all you Americans out there who use drugs – whether casually or habitually – and think it’s a victimless crime: You are a big part of the problem!

Yes, the other part of the problem is the fact that marijuana, cocaine, heroin, and methamphetamine are all illegal. That is not what this post is about, and I’m not going to debate that here.

They will use that money, in part, to buy guns. Those guns are used to kill other Mexican cartel members, Mexican police officers and soldiers, and innocent people (some of which are children and infants) who don’t do what the cartels order them to do.

Bottom line, the actions of American drug users have immediate and deadly consequences in Mexico. They are also putting our US law enforcement officers along the border and beyond at high risk.

Our cops are increasingly being confronted by violent drug smugglers all because those smugglers are willing to kill just to make sure you get your baggie of pot for the weekend’s parties.

Just think about it.

Watch the short video below, and let the facts – and the connection between us and our neighbor to the south – sink in.

Pass this on to young folks, college kids, people you party with, and anyone who needs a bit more understanding of how we’re connected.

Latina Cubicle Confidential™-- What Does YOUR Personal Brand Say About You?
2 Comments
First national conference promotes inclusion of Latinos and African Americans in biomedical industry