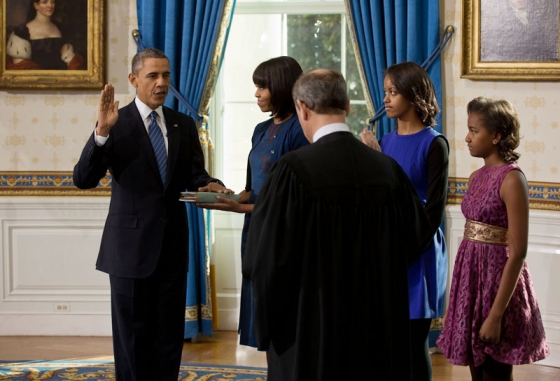 LatinaLista — The inauguration of President Barack Obama as he embarks on his second term in office holds special significance for the nation and him, historically and personally.

President Obama has often stated that the two men he has admired most from history are Abraham Lincoln and Dr. Martin Luther King, Jr. He will be bringing to his inauguration a little bit of the history of both men by incorporating two items in his swearing-in ceremony that were personal to each man — their bibles.

In an interview posted on the White House blog about the meaning of his inauguration, President Obama credits both Lincoln and Dr. King to making it possible for him to be President of the United States.

Also, thanks to the U.S. Constitution President Obama and Vice President Biden enjoyed two swearing-in ceremonies. The U.S. Constitution mandates that the President takes the oath on January 20. Because this year, January 20th fell on a Sunday, the public inauguration and parade were held on Monday, which is also the federal recognition/national holiday of Martin Luther King Jr.’s birthday.

Some will call it coincidence and others will call it divine destiny. Either way, the nation honors two men — President Barack Obama and Vice President Biden — on a day that illustrates how a democracy reflects the will of the people.