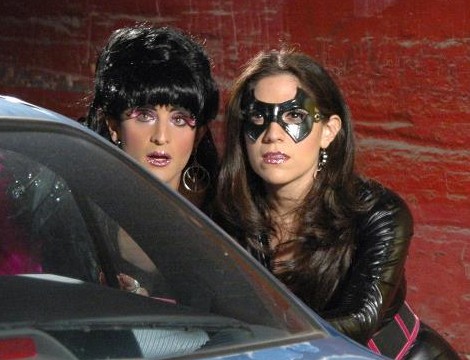 LatinaLista — Move over Wonder Woman, Super Woman and every other female action heroine. It’s about time a Latina joined the ranks — and she has!

By day, she is , tough-talking Assistant DA Sofía Escala. By night, she strikes fear into the heart of bad guys as Justice Woman!

Both characters are the alter-egos of real-life Latina lawyer Vanessa Verduga. Always wanting to combine the two loves of her life — law and acting, Vanessa created the character, writes the episodes, co-produces, directs and stars in the new web series.

Of Ecuadorian, Spanish and Italian heritage, Verduga was inspired to create Justice Woman because of her own law experience where she advocated for the disenfranchised.

Since no action hero is complete without a sidekick, Justice Woman’s partner is her co-worker Robert (Roberta) Gallion, who likes to dress in drag alongside the form-fitting disguise of Justice Woman.

The first few episodes have been filmed and are ready for the October 4 premiere. Reminiscent of the old Batman TV series, Justice Woman blends that necessary campiness with the real issue of dealing with corruption in the legal system. The combination creates yet another example that underscores how Latina talent is creating its own opportunities in a Hollywood that only sees them in a handful of roles.

Guest Voz: Endependence Day — A new start meaning ending the Illusion to deal with reality
1 Comment
Non-profit Spotlight: Giving seniors an extra hand to help them stay in their homes