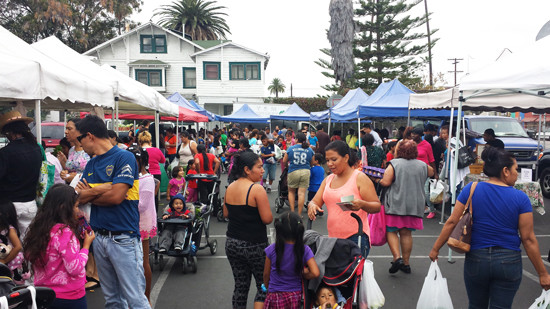 Frank Tamborello is one of a team of people in Los Angeles who believes that eating healthy should not just be for the wealthy!

Several years ago a group of concerned residents formed Hunger Action LA to address issues of both hunger and healthy eating. The 2008 recession resulted in Food Stamp use being doubled all over the USA. Los Angeles’ large population of struggling working families, the unemployed and seniors trying to make it on small pensions needed access to healthier, more affordable food. Frank and his team knew there must be a way to help farmers grow more healthy foods low-income families could afford.

After looking into programs in other parts of the country that doubled the money of people using CalFresh (what used to be called Food Stamps) at farmers markets, Tamborello and his team began raising money for a program that farmers coming to Los Angeles could benefit from while offering more food to those who needed it.

Many low-income families can’t afford the basic fruits and vegetables needed to be healthy, that’s why diabetes and obesity are two of the worst diseases facing the country today.

It’s not the amount, but the poor quality of food that leads to poor health.

Farmers markets in California originally began (after a campaign to establish them as legal) in the 1970s, as a way to help small farmers sell goods in low-income areas that needed more organic fruits and vegetables. Unfortunately, over the years they had a reputation of being places where only people who could afford luxurious food items could shop.

But kale, collard greens, white radishes, tomatoes, and avocados aren’t just for the wealthy! Every person should have access to healthy foods regardless of their income, and Market Match levels the playing field.

Today the Market Match Program allows low-income families using food stamps to get up to $10 in vouchers extra per week to spend on fresh fruits and vegetables at farmers markets–amounting up to $50 a month!

The program was expanded to other low-income populations as well, especially seniors getting Supplemental Security Income pensions.

People are flocking to the markets for healthy food that won’t break their budget, but there is still not enough resources to meet the rising demand at the markets — as a result Tamborello and his team are forced to limit the number of vouchers they distribute.

The crowdfunding campaign helps the small California farmers, many having to cut production due to the drought. Unless they get more income on a regular basis, they won’t be able to afford to keep driving to L.A. to sell at the markets.

There could be a loss of environmentally sustainable farming and a loss of affordable farmers markets in the urban areas.

This campaign will help thousands of families, seniors and people with disabilities get a dignified healthy diet that will help the farmers now struggling with the drought who are bringing this great food into Los Angeles.