Anniversary of Civil Rights Law sees a renewed attack on the civil rights of Latinos, blacks and women

LatinaLista — The Civil Rights Act celebrates its 48th anniversary today. It was on July 2, 1964 when President Lyndon Johnson signed it into law. 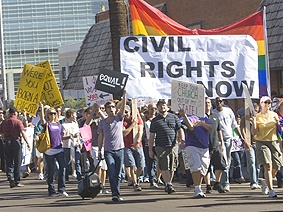 The Civil Rights Act outlawed major forms of discrimination against African Americans and women, including racial segregation. It ended unequal application of voter registration requirements and racial segregation in schools, at the workplace and by facilities that served the general public (“public accommodations”).

However, a law that was supposed to bring equality to the citizens of the country has been attacked and even deemed unnecessary by critics. Some equate the law to Affirmative Action, asserting it’s a bill that has outlived its usefulness. Yet, a casual glance at headlines today shows if ever there was a need for the Civil Rights Act, it is today. Civil rights are still being attacked, compromised and disrespected — by conservative lawmakers, social extremists and those who want to turn the clock back on race relations, gender equality and social acceptance.

To illustrate the attack on Civil Rights today, here are a few examples:

State governments across the country enacted an array of new laws that could make it significantly harder for as many as 5 million eligible Americans to vote. Some states require voters to show government-issued photo identification, often of a type that as many as one in ten voters do not have. Other states have cut back on early voting, a hugely popular innovation used by millions of Americans. Still others made it much more difficult for citizens to register to vote, a prerequisite for voting.

These new restrictions fall most heavily on young, minority, elderly, and low-income voters, as well as on voters with disabilities. This wave of changes may sharply tilt the political terrain for the 2012 election and beyond.

Voter Purge: Currently, Florida is doing a state-wide voter purge that is alarming everyone from the League of Women Voters to the Justice Department.

Florida’s purge list has shown to be rife with errors, and many local election officials warned from the start it was inaccurate. This flawed list was used to send purge notices to hundreds of eligible citizens, disproportionately Hispanic and members of other minority groups. Among them was Bill Internicola, a Brooklyn-born 91-year-old WWII veteran, who said he was “flabbergasted” when he received such a letter. The Department of Justice sued Florida, asking the state to stop the purge because it violates federal law.

Title IX: Title IX is a section of the Education Amendments of 1972. It states: “No person in the United States shall, on the basis of sex, be excluded from participation in, be denied the benefits of, or be subjected to discrimination under any education program or activity receiving Federal financial assistance…”

As forthright as the law is, it also is not being followed as Education Week noted:

The U.S. Department of Education’s office for civil rights announced a settlement this afternoon with four districts regarding Title IX complaints about unequal athletic opportunities for female students…the civil rights office found girls to be underrepresented athletically, based on each of the districts’ total enrollment figures.

SB1070: Though the Supreme Court disagreed with most of Arizona’s anti-immigrant legislation, it kept in place a provision that threatens to trample the rights of Latino citizens unlucky to live in Arizona.

…many immigration activists throughout the country view the Court’s decision as a threat to the civil liberties of immigrants and non-immigrants alike. They fear how the decision makes “Juan Crow” the law of the land.

At a time in our history that most would like to think the general populace is enlightened enough to be color-blind and gender-blind, the sad reality is that it’s far from the truth. At least, the Civil Rights Law ensures people act within its framework, or risk a lawsuit, until the day everyone can do it on their own and there is never a question of treating someone else differently simply because of who they are.

Unfortunately, that day has not yet arrived and it doesn’t look like it’s coming anytime soon.