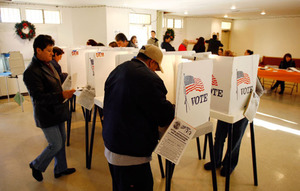 There is not yet any nationwide data on Latino voter registration levels so far in 2012. In the only four states that report such records by ethnicity — Alabama, Florida, Georgia and North Carolina — the 2012 registration levels of Hispanics have already surpassed the 2008 levels.

While not representative of the nation as a whole, it is a promising sign that these states are not isolated cases where Latinos have turned out to register to vote — and there are already signs that Latinos are proving the naysayers wrong by turning out in larger numbers for early voting in these same states.

In fact, early voting lines have been just as long as they were in 2008 with more cities in different states reporting as such:

Even if Latinos didn’t turn out this time around anymore than they did in 2008, it would still be a good turnout but signs are all pointing to the fact that Latinos won’t disappoint.