If attitudes don’t change, Latino voters on track to becoming their own worst enemies 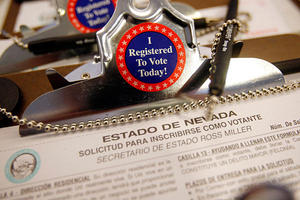 Somehow, that simple nugget of common sense isn’t resonating with Latino voters this year. It’s headlines like Hispanic leaders worry over slow voter registration; Latino vote requires more nurturing; or Latino Growth Not Fully Felt at Voting Booth that aren’t helping either political party to see Latino voters as the game-changers we know we can be and we need to be.

Why do we need to be seen as game-changers? Because of the other headline appearing today: National Immigrant Youth Alliance to Carry Out Actions of Civil Disobedience This Week at Obama Campaign Offices Nationwide.

According to the press release, undocumented youth are demanding President Obama issue an “executive order to stop the deportation of DREAM Act-eligible youth.”

“Obama has to prove that he’s different from Romney. He’s not as long as we’re getting deported,” said Rodrigo Hijonosa, a member of the National Immigrant Youth Alliance from New Mexico. “Undocumented youth are self-deporting, and their families are getting torn apart by ICE. We need an executive order now.”

Unfortunately, no President or presidential candidate is going to feel particularly threatened or guilted into supporting these students if he can’t see a return on his political investment. In this case, granting an executive order for Latino votes, that according to headlines, aren’t coming.

It doesn’t take a pollster to know that this election is a far cry from 2008 when Latino voters weren’t just enthusiastic about electing Obama but energized about using their votes. Whether it’s the broken promises, the broken economy or the dismal state of jobs for Latino workers, Latino voters aren’t feeling it in this election.

If enough of us don’t feel it, and then take it one step further, and don’t show up at the polls to vote in November then all the potential of growing political clout and attaining influence to impact not just the presidential election, but state and local elections too, will be lost and could set political growth for the Latino community back an election cycle, if not longer.

We need to bring in the undocumented immigrants from the shadow economy to stop the abuses and exploitation. We need to recognize undocumented youth. We need to stop the deportations that are separating families and creating new family dynamics among a new generation of Latinos in this country. These are issues that few non-Latino Republicans or Tea Party fanatics care to even want to know about but something Latinos cannot neatly separate as being a citizen vs. non-citizen kind of thing. We all overlap with these issues at some point in our own families.

Those of us who can vote need to vote to correct what has devolved into political prejudice on one side and feelings of disrespect from our side.

Otherwise, things like these acts of civil disobedience, will go nowhere if politicians know that the rest of the Latino community is willing to sacrifice segments of our population and lose any potential political influence because we would rather hold grudges than keep moving (politically) forward.