LatinaLista — It’s finally time to put the Sleeping Giant myth to bed. Though not all eligible Latino voters turned out to vote — 11.2 million, according to a Pew Hispanic Center analysis — it was still enough to give President Obama the winning edge and marked, for the first time, a legitimate claim to being the single decisive factor in Obama’s win, as reported by the national political opinion pollsters Latino Decisions. 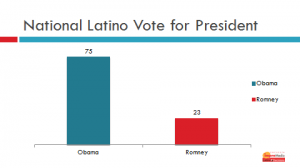 But that’s not all. In fact, that alone would not be reason enough to declare that the Latino electorate is no longer a sleeping giant.

What the Latino turnout signified, along with current population predictions, is that the Latino electorate is on a steady course to gaining a sizable share of eligible voters.

However, their share of the electorate will rise quickly for several reasons. The most important is that Hispanics are by far the nation’s youngest ethnic group. Their median age is 27 years — and just 18 years among native-born Hispanics — compared with 42 years for that of white non-Hispanics. In the coming decades, their share of the age-eligible electorate will rise markedly through generational replacement alone.

According to Pew Hispanic Center projections, Hispanics will account for 40% of the growth in the eligible electorate in the U.S. between now and 2030, at which time 40 million Hispanics will be eligible to vote, up from 23.7 million now.

It wasn’t that long ago when everyone was counting down to the time when Latinos would achieve the distinction of being the nation’s largest ethnic or race minority. It came sooner than predicted.

Time will tell if Latino voters really have to wait till 2030 to exact the kind of political influence proven to already exist — to both non-Latino and Latino doubters.

Young Latino voters turned out in greater numbers in 2012 than four years ago
Comment
Video: Inspiring and entertaining children is the goal of illustrator Rafael López