LatinaLista — On the eve of the most celebrated day honoring our nation’s history, a new report recently released by The Border Network for Human Rights shows that the fight for freedom and human dignity continues to this day. 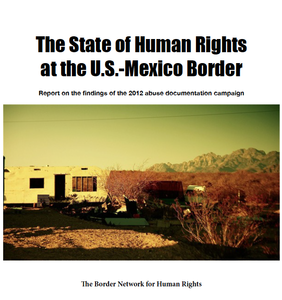 The State of Human Rights at the U.S.-Mexico Border: Report on the findings of the 2012 abuse documentation campaign documents human rights abuses found in West Texas and southern New Mexico at the hands of law enforcement agencies, stretching from Las Cruces, New Mexico to east of El Paso. The latest report is the most recent version of an editorial campaign that began in 2000.

The need for the report resulted from the area being highly militarized and patrolled by law enforcement agencies intent on stopping undocumented immigrants from entering the United States, according to the report’s authors. Stories about constitutional, civil and human rights being violated by law enforcement in their quest to enforce current immigration law first aroused concern in 2000, the year the first report was released.

In the 2012 report, abuses reported were:

There is a continued trend of local law enforcement acting as immigration agents. It is a problem most pronounced in Southern New Mexico. A pattern has been observed in previous campaigns and Southern New Mexico Border Network for Human Rights coordinators continue to receive regular reports from community members of improper immigration checks by local police and sheriﬀ’s deputies.

The 2012 campaign saw an increased severity in the incidents reported at points of entry.The problem of understaffing has been prevalent at these ports for years, leading to long waits and detentions of individuals. However, this year saw a clear pattern of alleged physical, psychological and verbal abuse by Customs agents at points of entry.

The most common forms of reported abuse were:

While the report does make a detailed listing and breakdown of the abuses reported to the team who documented the cases, the report goes beyond just pointing a finger. The report’s authors make recommendations that would help build up the trust between the local community and law enforcement agencies and bring needed transparency to federal agencies’ handling of undocumented immigrants.

For example, the report’s authors suggest President Obama create a Border Enforcement Accountability and Oversight Commission to “assess, monitor and investigate all federal border and immigration policies, projects, programs, and activities, including those of DHS.”

Congress must address family separation and wrongful deportation concerns in the form of a comprehensive reform of the immigration system;
Congress must pass the End Racial Profiling Act;
The increase of resources and Customs personnel must be prioritized at all international ports of entry in the area to address lengthy wait times and deficiencies when checking individuals and vehicles crossing the border legally.

To many in the United States, the U.S.-Mexico region is equated as the old West but as this report illustrates even enforcement of the law should not violate the rights of people who are peaceful and otherwise law-abiding.