When talking about Latino voters, new poll shows it’s all about Latinas

LatinaLista — A new tracking poll released today by impreMedia/Latino Decisions highlighted a reality that has so far been ignored by both presidential campaigns — Latinas overwhelmingly favor Obama over Romney. 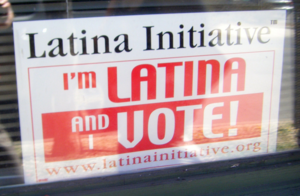 Why the big point spread?

It boils down to one factor: Latinas see the Democratic Party as the one most likely to come through on women’s issues.

With Romney talking about repealing/replacing the Affordable Care Act, vetoing the DREAM Act, attacking Planned Parenthood, boasting to overturn Roe v. Wade, vilifying Latino immigrants…the reason is not hard to understand why Latinas see Romney as a throwback candidate from an era that delighted in having second-class citizens and making sure they knew their place in society.

What Romney, nor the Republican party, counted on was that since the time when US society treated Latinos, women and other people of color just like that, Latinas got educated and got civically engaged. More Latinas are getting college degrees and voting — and talking to their friends, neighbors and families.

Latinas have evolved into voters with a critical ear that can discern which party really loves women.