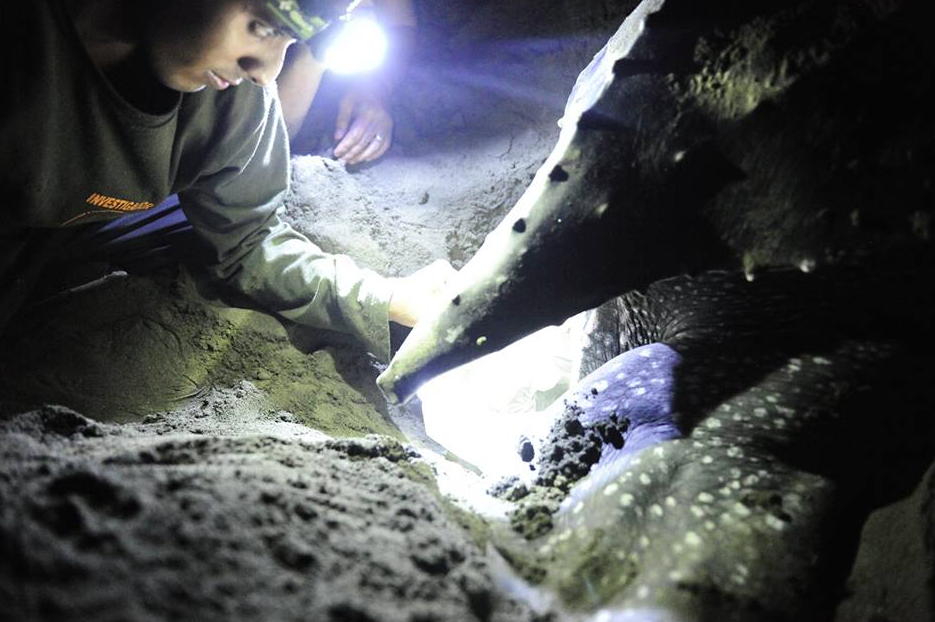 LatinaLista — It is a crime that a majestic species, such as the leatherback sea turtles, that have lived over 150 million years on this planet, should see its numbers drastically drop in some parts of the world over 90 percent in a span of only 20 years. In this case, climate change is the least of the guilty culprits responsible for this kind of wildlife genocide.

The guilty party is human beings, the one species on this planet who should understand that every living creature has a vital role in the global ecosystem. Yet, unlike other creatures, only humans can be motivated by greed and profit to not only decimate whole branches of the animal kingdom without reason but kill their own kind if it interferes with their opportunity to make money.

That is what happened to 26-year-old Costa Rican environmentalist Jairo Mora Sandoval on May 30, 2013. The assumption is that Sandoval was murdered by ‘hueveros‘ — egg poachers who sell the prized sea turtle eggs to drug traffickers — as retaliation for speaking out about them and what they are doing to the population.

Sandoval’s beaten, bruised and naked body was found on Moin Beach, the same sandy shores where Sandoval spent many hours documenting the lives of leatherback sea turtles. A staunch defender of the species that is the largest of its kind on the planet and grows up to 6ft in length, weighing up to 900 lbs and whose females lay around 100 eggs per nest, Sandoval was intent to save these gentle giants from extinction — but nobody could save him.

And it looks like nobody may be able to save the leatherback sea turtles of Moin Beach anymore either.

As a result of Sandoval’s murder, the environmental organization Wider Caribbean Sea Turtle Network, where Sandoval worked as a beach monitor, has closed its sea turtle monitoring program. In the meantime, Sandoval’s death has galvanized conservation groups who have created the Jairo Mora Sandoval Reward Fund, a $10,000 reward for information about Sandoval’s murder.

“Jairo’s murderers must be brought to justice so that sea turtle activists around Costa Rica and the world know that this will never be tolerated,” said Todd Steiner, a wildlife biologist and executive director of SeaTurtles.org. “The whole world is watching to make sure the Costa Rican government brings these thugs to justice and makes sea turtle nesting beaches safe for conservationists to do their work.”