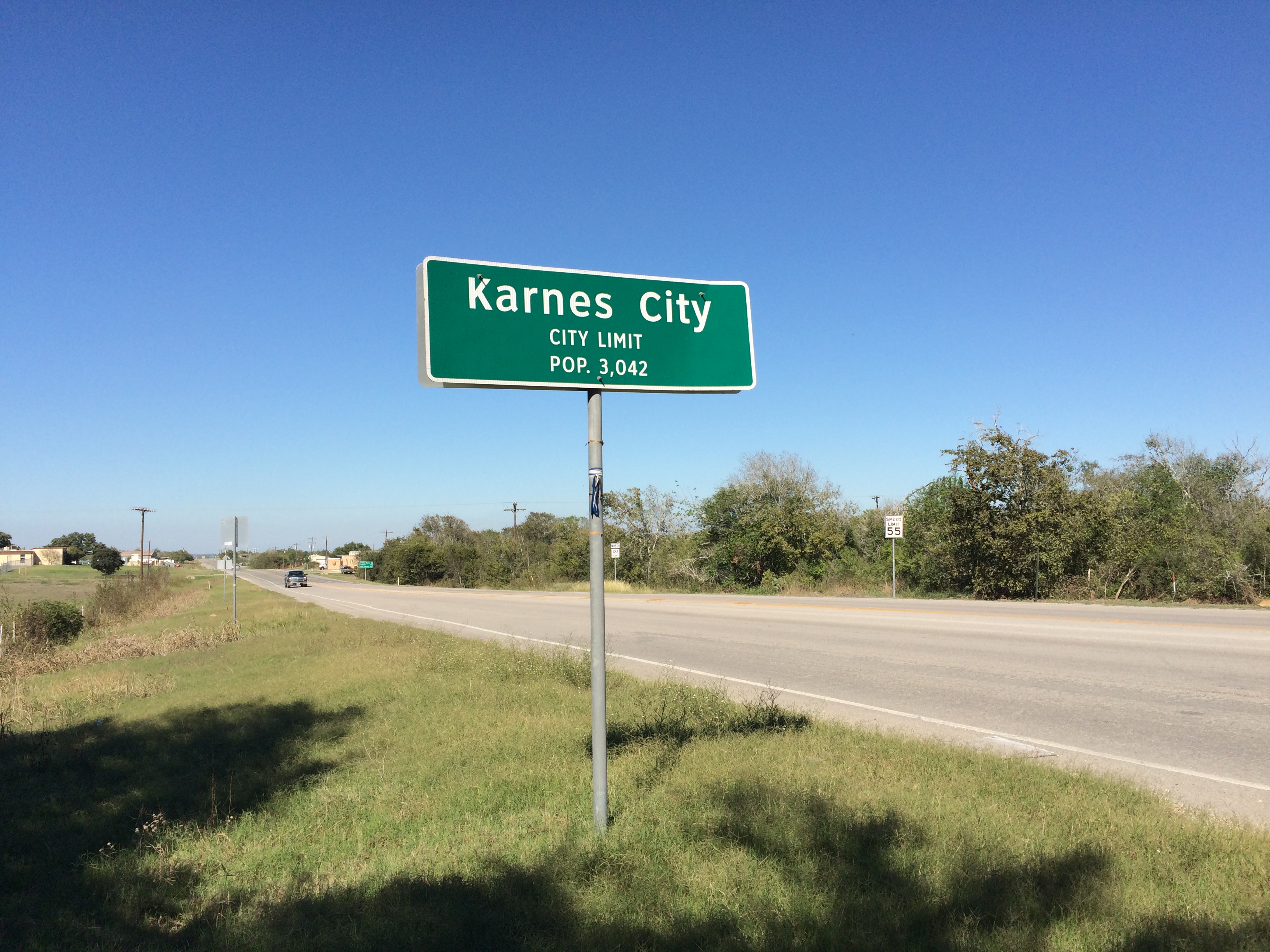 Every so often, in every community, an enigma rises to the surface.

Living unassumingly in the quiet of a small town or the manicured lawns of suburbia, a mystery neighbor lurks suspiciously out of sight of weary peers. Residents know little, see little and hear only gossip. Sometimes, this character is endearing. Sometimes, it’s downright scary.

In a small Texas town an hour from nowhere, “everybody knows everybody” is more accurate assertion than common cliche. Three thousand people, three humble square miles and a single 3A high school mean strangers may come and go in Karnes City, but when they do, everyone takes notice. Rumors run rampant in South Texas and secrets are illusory.

The GEO Group’s Karnes County Residential Center, a magnet for media coverage and the subject of much debate and protest, is Karnes City’s mystery neighbor. When it first moved in, no one thought much of the male immigrant population housed in what was then called the Karnes County Civil Detention Center. Then, a contractual modification in July 2014 converted the 532-bed facility, all but overnight, from a men’s center to a temporary location for women and children.

The wave of mothers, families and lone children that prompted the change in contract were running not only from Mexican drug cartel violence, but from the bloodthirst and corruption in Honduras, Guatemala and El Salvador, three nations with some of the highest rates of murder in the world. After 10,622 unaccompanied children and 16,329 adults with children that were apprehended at the U.S.-Mexico border in June alone last summer, outpacing the typical 4,000 monthly arrests, the government began to scramble for solutions.

And suddenly, what once seemed simple began to get complicated, as new detainees were bused into Karnes City beginning in August 2014. 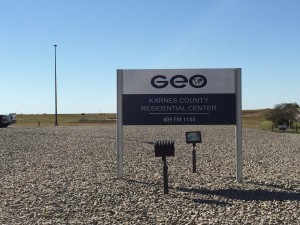 Outside the facility, a sign for the GEO Group designates ownership.
Photo by Aubrie Iverson/VoiceBox Media

Like any tacit recluse, the broken patterns of behavior at the facility piqued the interest of the neighbors.

Nestled behind its less-savory, razor-wired sister, the correctional center, the renovated family residential center is just far enough off state highway 181 to escape the eyes of passers through. But despite its reserved locale and modest exterior, what goes on behind its closed doors has drawn more than a few flies.

“You have your people from outside, your outsiders, who might come here just to give their opinion,” said Robert Jonas, council president of St. Paul’s Lutheran Church in Karnes City. “The radicals come in, act up and then they leave. And that gives the appearance that the town might be that way. And we’re not.”

The “radicals” Jonas describes have been present in the form of more than one organization that has taken it upon itself to disrupt the everyday lives of Karnes City residents in the name of social justice. Negative coverage has been the name of the game since Immigration and Customs Enforcement brought women and children into Karnes City. Ranging from hunger strikes by female detainees to allegations of sexual abuse within the facility, the accusations swirling around the community have done nothing but encourage locals to stay far, far away from the building if they can avoid it. 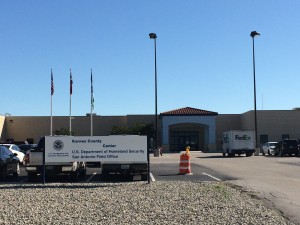 From the street, a modified sign boasts of ICE’s involvement. The facility is so placid that Karnes City residents have jokingly referred to it as “the Best Buy center”.
Photo by Aubrie Iverson/VoiceBox Media

Though perhaps Karnes City locals did not respond with as much vigor as some of the more “irate” outside protesters, churches and groups nearby did initially make efforts to do good for the detainees being brought to their town. But it’s a common recount among residents that hands reaching out to help newer women and children assigned to the facility have simply been swatted away: toy donations given back, and clothes donations refused.

Arden Dorn, interim pastor at St. Paul’s Lutheran Church since March 2015, bears witness to a congregation whose stung hands have begun to turn their tongues bitter. It seems that caring for a flock with weapons and political opinions has a way of taking its toll. In such a small community, where people might be expected to stick together, opinions run the gamut from concern and care for migrants to “kill ‘em, get rid of ‘em, send ‘em back”.

“You have people saying you have no business doing justice, and others who say you’re not doing it and you should be,” said Dorn. “And you’ve got a huge void of people who couldn’t care less.”

Dorn isn’t the only one who tastes apathy. It seems that the GEO Group’s choice of location, tucked away on a road to nowhere, did the job it needed to do: even though it’s a only stone’s throw from the town’s main streets, it’s hidden enough that some residents don’t even bear it mind.

“It is so disconnected from us that it’s just not a part of daily life,” said Kevin Cornelius, pastor at First Baptist Church in Karnes City. “It doesn’t affect our community. It doesn’t help, it doesn’t hurt… It’s just kind of there.” 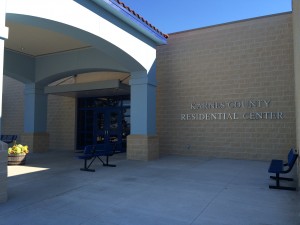 The entrance to the Karnes County Residential Center may appear serene, but it has been accosted by accusations of mistreatment since it began housing women and children.
Photo by Aubrie Iverson/VoiceBox Media

The only connection that seems to keep the residential center conversation in play is the local workers who are hired to do the GEO Group’s bidding. With nearly a quarter of the Karnes County population living in poverty, local workers might be stuck with what they can get.

“In the community there’s very little relationship, but there’s an economic factor. Lots of people work there,” said Dorn. “The pay is extremely good and the private prison system — It’s very difficult to figure them out.”

One of very few people in Karnes City who have seemed to figure that system out is Father Stanislaw Marciniak, or Father Stanley, of St. Cornelius Catholic Church. A committed proponent of his faith, Father Stanley has been delivering Mass to migrants kept at the residential center since it first opened its doors to men in 2011. After four years of weekly visits to detainees of all sorts, Father Stanley said he was only recently granted access to mingle freely among the women and children who are housed there. That population, however, is different every week he goes.

“You’ll see the big buses go in and out,” said Jonas. “You know they’re moving them.”

But for all the migrants moving in and out of Karnes City, the hearts of residents move less and less. After rejected offerings and corporate shut-out, the GEO Group has made it easier to forget about the migrants in their midst than to reach out to fellow humans and join hands in fellowship.

“No one is going to do anything, because they don’t want to upset the apple cart,” said Dorn. ” ‘We’ve done it this way, we’ve lived together and I’m not going to become an advocate for justice.

If you have questions, or would like to reach the reporters, please email info@thevoiceboxmedia.org.}

deportations, detention, featured, immigration, immigration reform
Previous Post Crowdfunder: Saving the poems of Pablo Neruda
Next PostHow the science of human behavior is beginning to reshape the US government

Crowdfunder: Saving the poems of Pablo Neruda
Comment
How the science of human behavior is beginning to reshape the US government