Latina Lista: News from the Latinx perspective > Causes > Social Justice > San Marcos, TX: The fastest growing city in the nation with one of the highest poverty rates in its’ state

San Marcos, TX: The fastest growing city in the nation with one of the highest poverty rates in its’ state 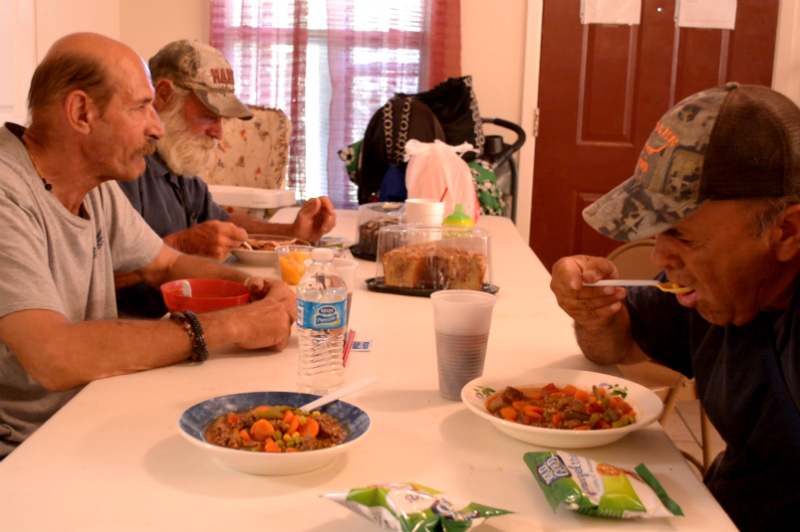 SAN MARCOS – Recently named the fastest growing city in the nation for the third consecutive year by the U.S. Census Bureau, San Marcos also possesses one of the highest poverty rates in Texas, and with poverty comes hunger.

According to Feeding America, 25,380 people in Hays County suffer from food insecurity, meaning the source of their next meal is unknown. America’s Health Rankings puts Texas 6th in America for hunger among older adults.

Redwood Baptist Church, Southside Community Center and the Hays County Food Bank are all organizations working together to help alleviate this issue.

Southside Community Center, located on Guadalupe Street in San Marcos, offers a place where patrons can eat a hot meal, take a shower and wash their clothes.

A recent Monday night found Southside Community Center shelter manager Linda Moraga scooping fruit cocktail into cups for the hungry guests at the Center while pastor of the Redwood Baptist Church Robert Rodriguez oversaw the chili in the small kitchen in back of the shelter. Volunteers filled the room, as Southside’s nightly dinner was set into motion.

“The community center is a separate entity from us. Some of the people who come out don’t necessarily want to mix church and assistance, and that’s fine. We try to help either way,” Rodriguez said.

The Redwood Baptist Church, headed by Rodriguez, is helping the nearly 40 percent of San Marcos residents who currently live below the poverty line.

According to the Census Bureau, the poverty threshold in Texas starts at $11,770 per year for one person and increases $4,160 per additional person. In the 2010 census, the median household income in San Marcos was $27,443 compared to the state average of $51,900.

Moraga said the shelter feeds 40 to 60 people a day.

“I was homeless for almost a year and I said if I ever had the opportunity to run this shelter for the homeless, I would be doing this,” Moraga said. “I know what it’s like to live as they are living.”

Rodriguez has been the pastor of Redwood Baptist Church for the past four years. His congregation sponsors free dinners in San Marcos and Austin each month and helps those in need of basic services, such as shelter, gas and utility bills.

“When we get a family in our church who asks for help, we try to get them food or gas and we don’t expect something from giving it to them,” Rodriguez said.

Moraga cooks dinner at the shelter each night, unless the shelter receives donations from supporters like area churches, Hays County Food Bank and H-E-B. The shelter recently received food from the American Red Cross flood relief.

“I want them to come and get a hot meal every day so I just give it my best,” Moraga said. “It makes me feel good knowing that these people are fed and full.”

Jamie Bucher has been coming to SCC for four years and walks her 18-month-old son, Zen Alexander, to the shelter every day, except when it rains. She considers people at the shelter to be family, as they took her in at a vulnerable time.

“If it wasn’t for here, I don’t know what I would do everyday for food,” Bucher said.

Bucher and her boyfriend David receive $511 a month in food stamps to support three people in the household, plus visiting family. According to Feeding America, the average cost of a meal in Hays County is $2.57. If each person in the household were to eat three meals per day for 30 days, that total would come out to $693.90, which is roughly $183 more than what Bucher’s family receives.

By attending dinner at SCC every night, the family saves almost $232 per month, which can be used for Zen’s infant supplies or other necessities.

“I know how much I will have to use towards baby stuff and we go through (the food stamps) really fast,” said Bucher. “We get them in the middle of the month which is on the fifteenth and usually by the first of the following month we’re already out of the food stamps. It isn’t much and it is hard, but we manage.”

If it weren’t for the meals Moraga serves, Zimen said he’d “have to get on food stamps or hustle enough to go to a fast food restaurant.”

Zimen said the recent flood relief brought a lot of resources to San Marcos, which has trickled down to the homeless.
“I think a lot of people were able to get a lot more food during the flood,” he said.

Zimen said a lot of people struggle to get enough food.

“You can panhandle and some people are generous, but it’s a struggle,” he said.

In addition to working with the community center, Redwood Baptist Church is also supplied with food baskets each Friday by the Hays County Food Bank. Rodriguez says these baskets aren’t just for church members, but for anyone in the community who inquires about them.

“They don’t have to be attending church,” Rodriguez said. “They just have to show up after the service.”

These food baskets, along with school supplies and Thanksgiving baskets, are distributed throughout the community through word-of-mouth. Rodriguez also contacts individuals and families who have asked for assistance before in order to assess whether they might need the extra help.

“Sometimes you do get people who take advantage, but, that’s why we have limits on how much we give,” Rodriguez said. “We don’t give cash, so by paying for things directly, or giving them gift cards, we can be sure that they’re doing what they’re supposed to do with the assistance.”

Rachel Johnson attends Redwood Baptist Church and volunteers at the Southside Community Center. She said she suffered from homelessness and now gives back to the community.

“I don’t look at them as homeless,” she said. “I look at them as my brothers and sisters, and they’re friends. I don’t just serve here or volunteer; I hang out with them.”

Xavier Nunn recently moved to San Marcos from Austin and has been visiting the shelter for three weeks.

“I was looking for a shelter and someone told me about it,” Nunn said.

Moraga said the community center relies on guests telling other people about the services they offer. Several volunteers suggested placing flyers in places frequented by people in need.

A lot of homeless and hungry people don’t know about the hot meals because “people who need the meals aren’t looking at the website,” said Moraga.

Nunn said the hot meals mean everything to him.

“It was hard for me to park and sleep, let alone go somewhere and get a meal,” Nunn said.

Nunn found employment in San Marcos but still visits the shelter to help set up the tables and chairs for dinner.