Video: PBS airs new documentary looking at the “State of Arizona” since passage of SB1070 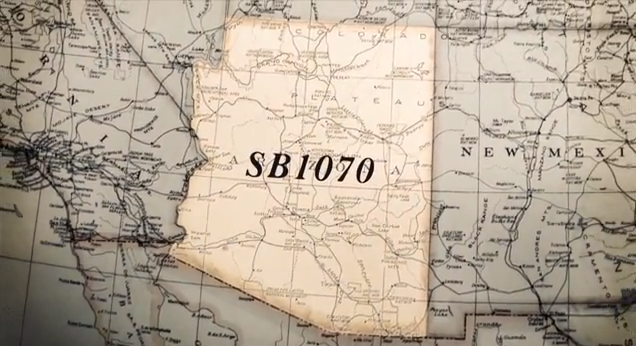 LatinaLista — Tomorrow night, January 28, 2014, President Obama will deliver his sixth State of the Union address (SOTU). And as he has in past addresses, it’s expected he will discuss the need to pass immigration reform.

A couple of undocumented immigrants will be in the chamber, as guests, to listen to the SOTU address. They and the rest of immigration reform activists hope the President will deliver something more than ‘should-a, could-a’ remarks regarding an issue that is adversely impacting too many of the next generation of Latinos.

One of the adverse consequences of not passing a national immigration reform bill is that some states have stepped in to create their own version of immigration reform. Unfortunately, those laws passed have been less about reform and more about enforcing a biased agenda.

A new documentary premiering tonight, January 27, 2014, shines a spotlight on one of the most notorious immigration bills passed in the country, Arizona’s SB 1070. The State of Arizona takes viewers onto the streets within the state of Arizona where Latinos are subjected to random police stops, raids by Maricopa County Sheriff Joe Arpaio and an increasingly hostile state government hell-bent on driving out the undocumented from their borders.

In an interview, the two filmmakers of the documentary, Catherine Tambini and Carlos Sandoval, shared their hope on how the film impacts viewers:

We each believe that film, that storytelling, has a special power to reach directly into people’s hearts and imagination. As someone with legal training, Carlos could have sought to impact policy in a more direct and traditional way. But there’s something in the power of story that’s necessary in an arsenal for change.

Obviously, people embedded in their convictions on either side aren’t going to be convinced to change their minds. But people closer to the center of the spectrum may broaden their perspective.