Latina Lista: News from the Latinx perspective > Columns & Features > BlogBeat > DREAMers No Longer of One Mind on Immigration Reform

DREAMers No Longer of One Mind on Immigration Reform 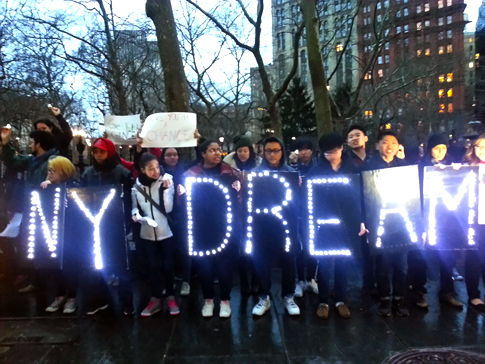 By Von Diaz
Feet in 2 Worlds

Undocumented youth have been on the front lines of the struggle for immigrant rights. They call themselves DREAMers to evoke both the proposed federal DREAM Act and a hope that they, too, can achieve the American Dream.

But the DREAMer movement is in flux.

Once monolithic, it is now fragmented, as frustration with the slow pace of progress has reached a new high. One reason is that the federal DREAM Act has yet to be enacted more than a decade after it was first introduced.

The New York Senate earlier this year narrowly defeated the proposed state Dream Act, which would have provided college aid to undocumented students — an estimated 90,000 young immigrants would have been eligible.

In response to growing concerns about thousands of unaccompanied immigrant minors who illegally crossed the border into the U.S., Republican lawmakers called on President Obama to deport DREAMers, even if they’ve been granted a temporary reprieve from deportation, known as deferred action or DACA.

As a result of the federal and local immigration reform impasse, growing numbers of young immigrant activists are questioning the core goals of the DREAMer movement.

Listen to Von Diaz’s story on WNYC about changes in the DREAMer movement.

Fi2W is supported by the David and Katherine Moore Family Foundation and the Ralph E. Ogden Foundation.