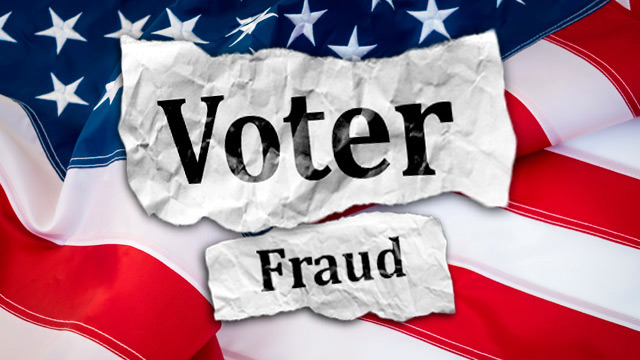 By Jesse Rhodes
The Conversation

President Donald Trump has “voter fraud” on the brain.

Bizarrely, after winning the 2016 presidential election, Trump has raised questions about the legitimacy of his own victory by claiming that the election was tainted by widespread voter fraud. Indeed, the president recently suggested that as many as 3,000,000 people voted illegally in the election.

Reports suggest that Trump’s obsession with voter fraud is due to his outrage at losing the popular vote to Democratic opponent Hillary Clinton. As Trump himself alleged in a recent interview, “of those [illegal] votes cast, none of ‘em come to me. None of ‘em come to me. They would all be for the other side.” 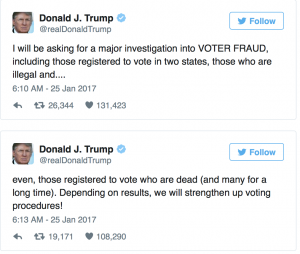 Trump’s comments are extraordinary – and, at best, profoundly misinformed. I’ve studied voting rights politics for years and have recently finished writing a book on the political erosion of the Voting Rights Act. My book – and the research of many other social scientists outlined below – flatly contradicts Trump’s claims about the prevalence of fraud in American elections.

Put bluntly, there is no evidence of widespread voter fraud by impersonation in the United States. “Impersonation” is what we call the deliberate misrepresentation of identity by individuals in order to manipulate election outcomes.

Research suggests allegations of voter fraud and the calls for stringent election rules are motivated by the desire to suppress voting by citizens of color.

Because stringent election rules suppress minority voting, Trump’s call for an attack on nonexistent voter fraud should be met with serious concern by all Americans. The last thing the United States needs is more measures that make it harder to vote.

‘Voter fraud’ is a myth

The claim that American elections are systematically tainted by widespread fraud by impersonation is a myth. Study after study – including a comprehensive 2007 investigation by the U.S. Department of Justice undertaken during the George W. Bush presidency – showed that there is virtually no voter fraud by impersonation anywhere in the United States.

The most comprehensive investigation of voter fraud charges found 31 credible allegations of fraud out of nearly one billion ballots cast between 2000 and 2014.

But what about the study, frequently cited by the president, that claimed to find evidence of noncitizen voting? It was thoroughly debunked by the researchers who organized the survey on which the original study relied. Briefly, the authors of the original study cited by the president failed to account for the fact that some citizens who voted misreported their citizenship status, incorrectly reporting that they were noncitizens. Because the total number of individuals on the survey who report being noncitizens was extremely small, the impact of this measurement error on estimates of noncitizen voting is enormous. Once measurement error is taken into account, the estimated number of noncitizen voters on the survey was zero.

And what of Trump’s claim that voter fraud by impersonation was rampant in the 2016 elections? There’s no evidence for it. A team of researchers at Dartmouth College looked into the allegations, and found no evidence. Echoing this conclusion, the National Association of Secretaries of State – which represents most of the states’ top election officials – released a statement concluding “we are not aware of any evidence that supports the voter fraud claims made by President Trump.” Most of these officials are Republican.

Even Trump’s own election attorneys have downplayed claims of voter fraud when it suited their political interests. For example, in a legal motion against Green Party candidate Jill Stein’s call for a recount of Michigan ballots, they admitted, “All available evidence suggests that the 2016 general election was not tainted by fraud or mistake.”

Why more stringent rules are problematic

If voter fraud is a myth, why has Trump called for measures to “strengthen up voting procedures”? Sadly, the evidence strongly suggests that supporters of restrictive voting rules are attempting to obstruct nonwhite citizens from voting, in order to promote the election of Republican candidates.

Research on public attitudes toward stringent election rules such as voter ID laws shows that support for these measures is strongest among those with uncharitable attitudes toward people of color. Indeed, one experimental study found that simply exposing whites to an image of an African-American person at the polls made them more supportive of voter ID laws.

But racial considerations not only shape the public’s view of stringent election rules. They also influence states’ adoption of measures that make it more difficult to vote. One detailed analysis of states’ adoption of restrictive voter access policies found that these measures were more likely to be adopted in states with Republican majorities, large minority populations and competitive elections. The authors concluded that “these findings are consistent with a scenario in which the targeted demobilization of minority voters and African-Americans is a central driver of recent legislative developments.”

Another comprehensive study of state adoption of voter ID policies reached the similar conclusion that “the furtherance of restrictive voter ID laws is a means of maintaining Republican support while curtailing Democratic electoral gains.”

More recent research that looks at the votes of individual state legislators on stringent election rules provides further evidence for this view. These studies show that support for restrictive voting policies is strongest among Republican legislators with large numbers of African-American constituents. The most plausible explanation for this pattern is a desire among Republican state legislators to suppress black voting to maximize their chances at reelection.

As troubling as all of this evidence is, it would be less problematic if policies like voter ID didn’t suppress minority votes. But they do.

Together, this evidence suggests when you hear someone – even the president – talking about “voter fraud,” what you’re really hearing is that person planning an effort to suppress voting by people of color.

Donald J. Trump, voter fraud, voting systems
Previous Post Urban Farmist: A DIY guide to making your home garden healthier & more resilient
Next PostGOP finds a way to get immigrants to self-deport without them even realizing it

Urban Farmist: A DIY guide to making your home garden healthier & more resilient
Comment
GOP finds a way to get immigrants to self-deport without them even realizing it