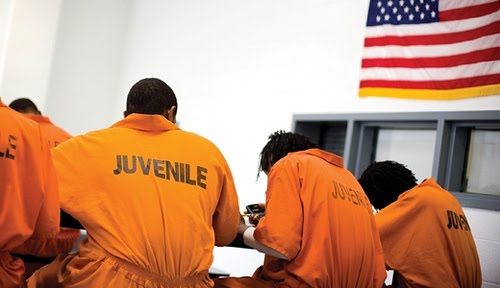 [This story is part of a series of articles on false confessions and filming interrogations, read the other articles in the series HERE, HERE and HERE.]

More than a third of juveniles convicted of serious crimes said in a recent study they had falsely admitted to a crime they did not commit.

The study, which appeared in the journal “Law and Human Behavior,” focused on 193 males aged 14 to 17 incarcerated in a California juvenile justice facility.

“We have an alarming number of youths who are at least claiming that they had made false admissions to crimes,” said the study’s lead researcher, Lindsay C. Malloy, an assistant professor in the Department of Psychology at Florida International University.

The study, based on interviews with the teens, found 52 percent of those who said they made a false confession to police did so to protect someone else – for example, a relative or friend, often an adult who could face a stiffer penalty than the youths.

“The consequences of falsely admitting guilt seem obvious to most, but there could also be consequences for these teenagers if they don’t take the blame for someone else,” Malloy said. “They may expect harsh retaliation from friends, family members or fellow gang members for revealing the true perpetrator’s identity, for example.”

The study noted that researchers had told the youths their responses were confidential and could not influence their future hearings or treatment by the judicial system.

A third of those who claimed they made a false confession cited duress resulting from police interrogation techniques, while 15 percent said they did so in order to receive a lesser sentence.

Just over half of those youths who claimed they had made a false guilty plea to a judge said they did so in order to receive a lesser sentence, while 32 percent said they did so to protect someone else and 14 percent cited duress resulting from pressure by lawyers. (The study did not distinguish between defense lawyers and prosecutors.)

The study also covered interrogation techniques by police and lawyers.

More than 80 percent of the youths said police had used threats during interrogations, including the threat of physical force. One teen reported police had threatened to shoot him in the face. Another said police told him he would never see his family again if he did not confess, while a third said he was told police would arrange for his enemy to be his roommate if he did not confess.

Other responses on interrogation techniques:

• More than 80 percent of the teens claimed they had made a false confession after police used deception such as saying they had evidence they didn’t really have. By contrast, just over 40 percent said a lawyer had used deception. It’s legal for police to lie during interrogation, Malloy notes.
• One in five of the boys said police had used physical force such as hitting or kicking.
• Just over 70 percent said police had befriended them – for instance, by saying they were there to help the youths. Just under 70 percent of the juveniles reported lawyers had befriended them.
• Nearly 40 percent reported police had refused to allow them breaks. These breaks could be for using the bathrooms, resting, eating a snack or drinking water.

“These [interrogation] techniques work well with all people but with youths – who are even more vulnerable, who lack knowledge about how the legal system works and what their rights are, understanding what’s allowed and what isn’t – they really are at a different level of vulnerability,” Malloy said.

The study noted longer interrogations and refusals to give youths breaks increased the likelihood of false confessions, as reported by the youths.

The study pointed to youths’ impulsivity, susceptibility to peer pressure, immature judgment and tendency to place short-term rewards (such as going home from a police station or jail) above longer-term implications of an action (like confessing to a crime).

“Current interrogation procedures ignore (and perhaps even exploit) the developmental vulnerabilities of young suspects, which stands in contrast to the legal system’s sensitivity to young victims and witnesses,” the study said.

Parents or lawyers were rarely present during questioning of the teens, the study pointed out, adding “it is particularly important that lawyers be present when young suspects are questioned.”

The findings come against a backdrop of research showing youths’ confessions often come during high-pressure interrogations when they are sometimes subjected to physical abuse, threats, intimidation and suggestions the criminal justice system will go easier on them if they confess.

“Our findings underscore the need for reform in policies regarding young suspects,” the study stated.

It urged law enforcement to “proceed especially carefully when questioning juvenile suspects” and warned against lengthy interrogations, depriving youths of counsel or other requests and questioning juveniles with a friend present (which can increase the likelihood of a false confession).

The study said surveys of law enforcement officials show they often recognize developmental differences between adolescents and adults but do not necessarily know how to apply that knowledge in the interrogation room.

“The existence of objective records of interrogation sessions may help deter, prevent and later detect the false admissions of juveniles, allowing fact finders the opportunity to make decisions based on direct observations of the interrogation techniques used, rather than potentially conflicting testimony about what occurred during the session,” the study said.

In contrast to the motivations for false admissions, the study found true admissions to crimes were most commonly “attributed to the desire to behave honestly.”