Latina Lista: News from the Latinx perspective > Columns & Features > BlogBeat > The ‘real’ first Thanksgiving had no turkey or pilgrims but plenty garbanzo beans and Spanish conquistadores 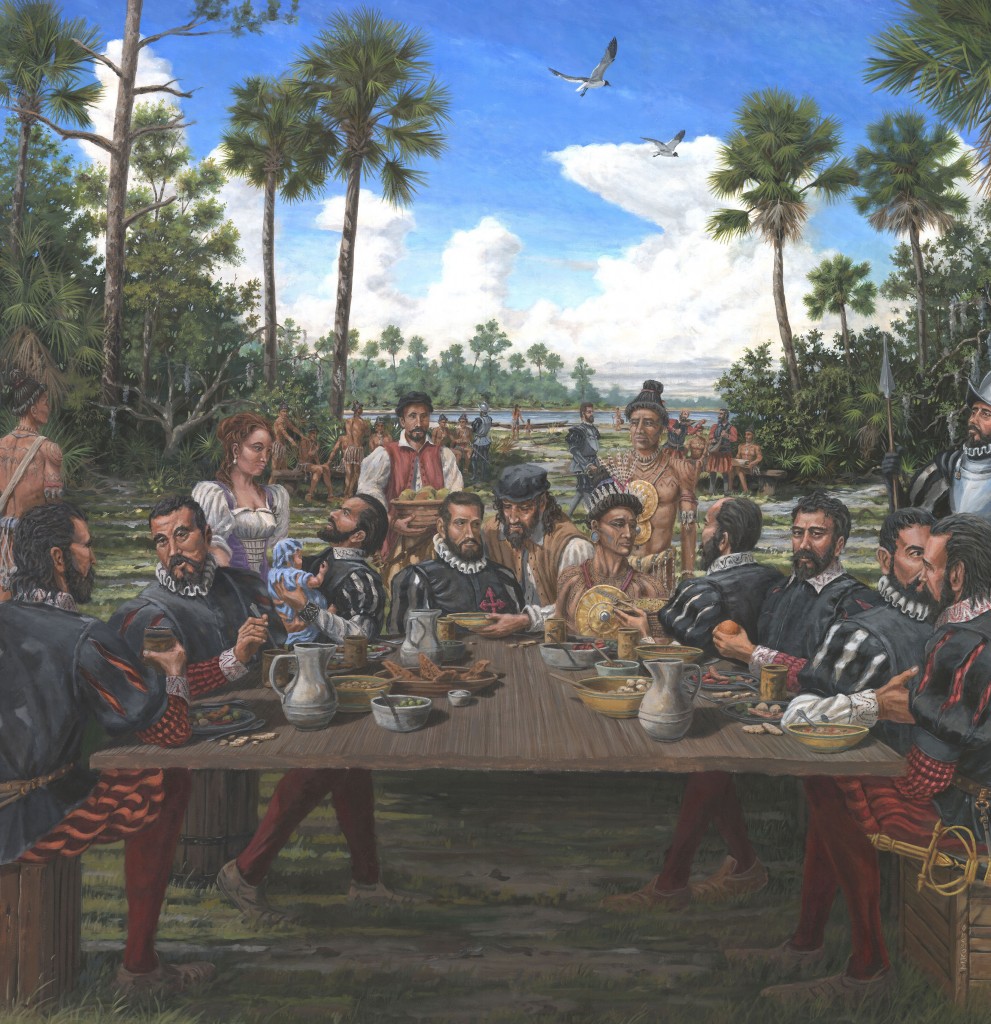 This Thanksgiving, people across the US will load the dining room table with turkey, stuffing, and pumpkin pie—the way most of us imagine the Pilgrims did at the first Thanksgiving in 1621.

But there’s just one catch, according to archaeologists: The Pilgrims’ Thanksgiving wasn’t the first.

“THE FACT IS, THE FIRST COLONY WAS A MELTING POT…”

The nation’s real first Thanksgiving took place more than 50 years earlier near the Matanzas River in St. Augustine, Florida, when Spanish explorer Pedro Menéndez de Avilés and 800 soldiers, sailors, and settlers joined local Native Americans in a feast that followed a Mass of Thanksgiving, according to Kathleen Deagan.

Instead of flat-top hats and oversized buckles, conquistadors wore armor and colonists dressed in 16th-century Spanish garments. There wasn’t any cranberry sauce or pie—not even turkey.

Instead, the meal consisted of an assortment of food, from salted pork and red wine shipped from Spain to yucca from the Caribbean, says Deagan, research curator emerita of historical archaeology at the Florida Museum of Natural History, located at the University of Florida.

“The holiday we celebrate today is really something that was invented in a sense,” she says. “By the time the Pilgrims landed at Plymouth, the people who settled America’s first colony with Menéndez probably had children and grandchildren living there.”

Retired history professor Michael Gannon writes in his book on the subject that the event “was the first community act of religion and thanksgiving in the first permanent settlement in the land.”

This little-known chapter of history challenges the traditional Thanksgiving story, which reflects an Anglicized version of history and supports America’s colonial origins being viewed as solely, or at least primarily, British, says Gifford Waters, historical archaeology collection manager at the Florida Museum.

“The fact is, the first colony was a melting pot and the cultural interactions of the many groups of people in the colony were much more like the US is today than the British colonies ever were,” Waters says.

“I think the true story of the first Thanksgiving is especially important, since there is a growing Hispanic population in the US and the role of the Spanish colony in La Florida is often neglected in the classroom.”

MASS AND A MEAL

Historical eyewitness accounts describe the first Thanksgiving as a scene marked by diversity, with colonists and local Timucuan people in attendance.

Waters says the meal probably took place near the mouth of present-day Hospital Creek on the Matanzas River, where today the Mission of Nombre de Dios and the Fountain of Youth Archaeological Park—the site of Menéndez’ original encampment and the first colony—are located. The feast followed a Thanksgiving Mass, which Deagan says was a common practice of sailors after a tumultuous expedition.

The 68 days that it took Menéndez and his followers to get to Florida’s shore had not been easy. After leaving Spain with eight ships, the group arrived in Florida with only four. Half of the original expedition was lost to hurricanes and other hardships.

Of those who made it to Florida, whether in search of riches and improved social standing or new opportunities like owning land, all were probably thankful to be alive and on dry land, Deagan says.

“A Mass and feast of Thanksgiving was the first thing Menendez did, and he invited all of the local native people who were so curious about them,” she says.

Besides salted pork and red wine, those in attendance ate garbanzo beans, olives, and hard sea biscuits. The meal may have also included Caribbean foods that were probably collected when Menéndez stopped to regroup and resupply at San Juan Puerto Rico before continuing to Florida, Deagan says. If the Timucua contributed, it would likely have been with corn, fresh fish, berries, or beans, she says.

Archaeologists have not recovered any artifacts or other archaeological data clearly associated with the first Thanksgiving, although they have found remains of the types of food that would have been eaten, Waters says.

“It is very rare to be able to pin down archaeological remains with a specific event, especially something as ephemeral as a single meal,” he says.

Crowdfunder: Chronicling the amazing journey of 15 Latin American indigenous women who became solar engineers
Comment
Colombia creates their own kind of crowdfunding in anticipation of long-awaited peace accord