Why American academics are building ties with Cuba 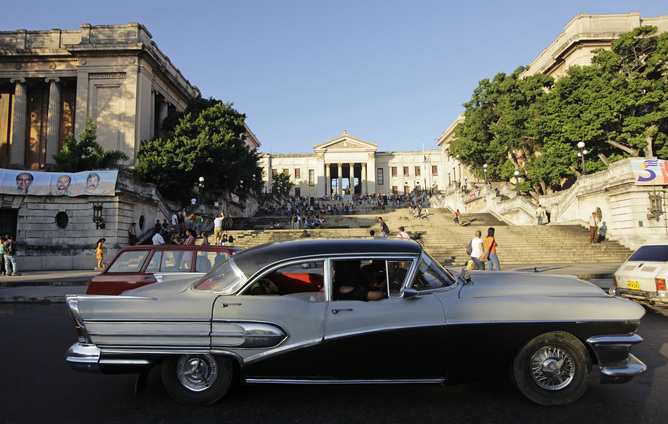 By Gerardo M Gonzalez
The Conversation

The thawing of diplomatic relations between the United States and Cuba will be good for people on the island and in America – and that includes students and academics.

American universities, such as Indiana University, where I serve as dean emeritus and professor of educational leadership and policy studies in the School of Education, are increasingly seeking linkages with Cubans and Cuban educational institutions. The Institute for International Education Open Doors Data show that in 2010-2011 there were 375 US students studying in Cuba. By 2012-2013, the most recent year reported, that number had grown more than fourfold to 1,633.

A history of success

Indiana University has a long history of engagement with developing nations including Vietnam, Macedonia, Angola, Kyrqyzstan, Indonesia, South Sudan and many others.

Before the opening of China, for example, Indiana University established a partnership with Zhejiang University . Today, Zhejiang is one of China’s top 10 universities and routinely sends undergraduate and graduate students to study on our Bloomington campus. Each summer we offer a select group of undergraduate students the opportunity to spend a month learning about American culture and heritage while considering their prospects for graduate study. This experience has taught us that such partnerships are an effective way to dispel misconceptions and establish longtime, mutually beneficial partnerships.

Indiana University is one of 12 American universities selected to participate in the Institute for International Education Cuba Higher Education Initiative to promote linkages with Cuba. Two other Big-Ten institutions selected are Rutgers University and the University of Nebraska-Lincoln. The goal of the program is for each participating university to develop a strategic plan for engagement with Cuban colleges and universities. The target date for completing the plans is December 2015.

We will take a study tour to the island in early fall to learn about the system of higher education in Cuba, identify potential partners and begin to form relationships with Cuban counterparts. Then Indiana University hopes to start working together on research, study-abroad opportunities, student exchanges and other forms of collaboration.

The road won’t be easy.

Cuba’s centralized system of governance presents considerable bureaucratic hurdles. Ideological differences between the two systems will require respect for differences and high levels of cultural sensitivity. American universities have had a long tradition of academic freedom and self-governance. In Cuba, academic partnerships and research must be centrally approved.

The obstacles are not insurmountable, however. Already there are signs that improved relations between the US and Cuba are accelerating social and economic reforms that would have been unthinkable just a few years ago.

In May 2012 I was invited to lead a group of Indiana University alumni to Cuba as part of a people-to-people cultural exchange tour of the island.

It was my first trip to Cuba since 50 years earlier, when my parents made the decision to leave everything behind to give my younger sister and me a chance for a better life than the Castro revolution promised. I was 11 years old.

We arrived in the United States with the clothes we wore, US$5, and two bottles of Cuban rum. My father promptly sold the rum to get a little extra cash.

America embraced us. We were given asylum, government assistance to get on our feet and the opportunity to pursue our dreams in freedom.

I was apprehensive about going back to my birthplace for the first time. I still vividly recalled how, 50 years earlier, the Communist government had called us and others leaving Cuba gusanos, or worms.

But the Cuban people I met were warm and welcoming. One of the first things I noticed was that everyone with whom I spoke either wanted to leave or wanted change. Many common people also were willing to speak out on the system’s flaws and call for a better way of doing things. Such openness was not what I expected to find in Cuba.

During a second visit, in 2013, I attended a lecture from an economics professor from the University of Havana who spoke about the new liberalization of economic and social policies. When I asked the speaker whether he saw any contradiction between Fidel’s dictum and the current privatization policies, he didn’t have a good answer.

He just shrugged his shoulders and said, “Ya veremos – we’ll see.”

What we are seeing is that privatization is gaining ground.

During my first trip, in 2012, I met a cuentapropista. This entrepreneur had started a business selling rum mixed with guarapo, the sweet juice produced when sugarcane is squeezed through a grinder, to tourists outside the Ernest Hemingway House Museum in the outskirts of Havana. Although we did not talk politics, it was obvious that he enjoyed talking with a fellow Cuban from America. He offered me a free drink.

I went to see him again in 2013 and he excitedly told me about his plans to expand his spiked guarapo business to a location outside El Morro, the iconic Spanish fort that dots the entrance to the port of Havana.

At Indiana University, among other things, we’d like to explore having students in our entrepreneurship program work with Cuban cuentapropistas to develop business plans. If that happens, Cuban entrepreneurs like my guarapo-selling friend would benefit, our students would gain real-world experience, and together we would be helping to pave the way for economic and social changes needed in Cuba.

That’s why the raising of the Stars and Stripes at the American Embassy in Havana will be good for the people of Cuba and for Americans.

Gerardo M Gonzalez is Dean of Education Emeritus and Professor of Educational Leadership and Policy Studies at Indiana University, Bloomington