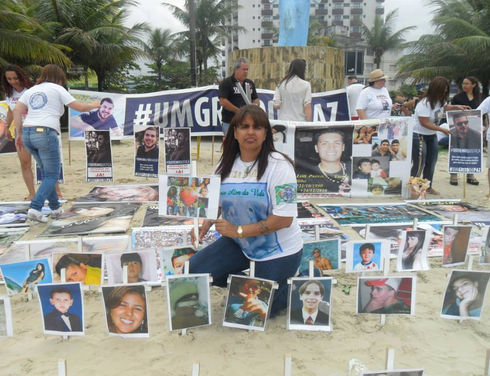 PORTO ALEGRE, Brazil – Every day, saleswoman Adriana da Silveira relives the morning of April 7, 2011. She still asks herself what she could have done differently to prevent the death of her daughter, Luiza, at the age of 14.

Luiza is among 12 students killed by Wellington Menezes de Oliveira, 23, in the Tasso da Silveira School in Rio de Janeiro’s North Zone. A former student of the school, Oliveira invaded the building, shot the children and killed himself.

In spite of her pain, Silveira discovered the inner strength needed to found the NGO Angels of Realengo, which has about 70 members.

“We fight for safer schools, but we also seek comfort from each other. Now, we’re one big family,” Silveira said.

Her suffering is shared by millions of Brazilian families.

“[The violence among young people] has become a pandemic, and it’s only getting worse,” said sociologist Julio Jacobo Waiselfisz, coordinator of the Mapa da Violência (Violence Map) series, released in July by the Brazilian Center for Latin American Studies (CEBELA).

“These are absurd and unacceptable statistics, no matter where you are in the world,” Waiselfisz said.

In Alagoas, the most violent state in Brazil, the annual murder rate for young people rose 185.6% between 2001 and 2011, according to the Violence Map.

The project being carried out by the Federal University of Alagoas (UFAL), known as UFAL for Life, tries to show the human side of victims.

“We show that the people who died had talents, things they loved,” said the project’s coordinator, Ruth Vasconcelos.

The most touching work is the Forest of Hope on the campus of the university in Maceió, where 140 trees were planted to symbolize lives lost.

One ironwood tree represents Carlos Roberto, the son of retiree Sebastião Pereira dos Santos, 73. Santos never got to bury his son, whose body went missing from the Coroner’s Office after he was shot more than 20 times in 2004. He was 31.

“By planting this tree, I was able to bury my son,” said Santos, who visits the forest weekly. “His tree is the tallest and most beautiful.”

The only son of businessman Luiz Fernando Oderich, Max, died in 2002 at age 26. He was shot during a robbery in Porto Alegre, Rio Grande do Sul’s state capital. His killer has never been brought to justice.

Only 6.1% of murder investigations in Brazil are solved, according to the National Strategy for Justice and Public Safety.

“The mobilization of parents is critical to changing this situation,” Waiselfisz said. “They aren’t afraid of the institutional tolerance toward violence.”

In João Pessoa, Paraíba’s capital, the children of banker Gláucia Belmont, 65, and nurse Hipenestre Carneiro, 52, died within a month of each other in 2010.

“We created the group Mothers in Pain to add a cry of mourning to the struggle,” said Belmont, whose son Everton was shot at a bar when he was 27.

“I thought I was alone, but suddenly I had 60 mothers alongside me,” said Carneiro, whose daughter Aryane was killed by her boyfriend when she was 21. “Our message is: ‘You are not alone.’”

Groups from across Brazil are all connected. Mothers in Pain participates in actions organized by the NGO Justice Is What We Seek, which supports Angels of Realengo.

Activist Sandra Domingues founded Justice Is What We Seek in 2004, even though she had never lost a family member to violence.

Outraged by “widespread impunity,” she mobilized people and connected families with psychologists and attorneys.

One of the NGO’s activities is a monthly mass at the São Judas Church, in São Paulo. About 400 families take part, carrying candles and pictures of their children.

“Then, we’ll have lunch, talk about the children and cry,” Domingues said.

Damage and a fresh start

Professor Luiza Jane Eyre de Souza Vieira of the University of Ceará discovered that the loss of a child can lead family members to start abusing alcohol, cigarettes or drugs, according to a study co-authored by Vieira, “The Impact of Violence on the Health of Families.”

“They feel mentally and physically weak,” said the professor, who interviewed members of the Association of Relatives and Friends of the Victims of Violence, in Fortaleza. “The group rebuilds people’s self-esteem and confidence. Many of them resume their social lives and reorganize their lives.”

Brazil, teens, violence
Previous Post San Diego's Latino voters stand behind Alvarez’s campaign for mayor
Next PostGuest Voz: Secretly negotiated trade agreement could be "TPP"ing point in creating a future none of us should want

San Diego's Latino voters stand behind Alvarez’s campaign for mayor
Comment
Guest Voz: Secretly negotiated trade agreement could be "TPP"ing point in creating a future none of us should want