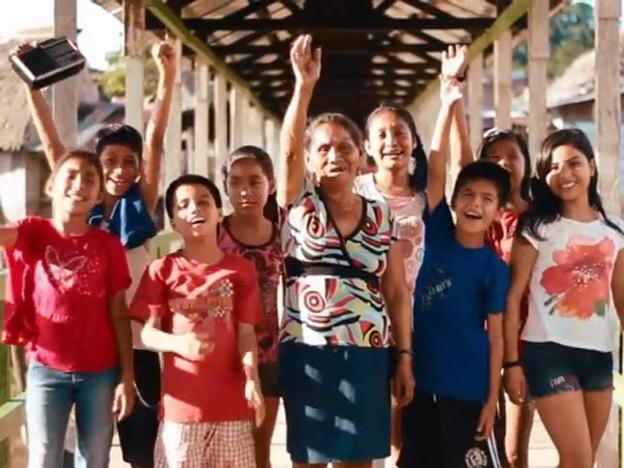 The people of Nauta, Loreto don´t want their native language, Kukama-Kukamiria, to disappear. So to that end the NGO, Create Your Voice, teamed up with a local radio station, Ucamara, to record a song with hip hop and traditional rhythms sung by children to save the language from the brink of extinction, El Comercio reported.

The song, “Kumbarikira” tells the story of a vulture that nobody wants and all reject. This becomes a metaphor of the reality of village life that many have ignored for many years, and which deserves further attention and recognition.

In the video posted on YouTube, a group of children sing and rap in both Spanish and Kukama-Kukamiria. They walk around a river village teaching one another not to be embarrassed to use the traditional language.

The video was recorded for three weeks in June and included workshops in which eight children participated in composing the song.

Radio Ucamara started making efforts to save the Kukama-kukamiria language a few years ago. Last year it started managing a school called Ikuar, with the goal of teaching the language through songs and traditional story telling.

Words such as camu camu, cocona, tapir, icarar (to sing) come directly from this Loreto language. The Ministry of Education has recognized Kukama-kukamiria of being “under great threat of disappearing.”

The Kukama-kukamiria people live along the Huallaga, Marañón, Ucayali and Amazonas rivers, in the cities of Loreto, Requena, Ramón Castilla, Maynas and Alto Amazonas, in the Loreto region. There are also a few communities in the Ucayali region of Peru.

As of 2000, there were estimated to be 20,000 Kukama people living near the river basin in Peru, Colombia and Brazil.

children, indigenous, music video, rap music
Previous Post Viernes Video: Latino writer taps his culture to create a film that dances to a salsa beat
Next PostTwo entrepreneurs bring the adrenaline rush of Running with the Bulls to US shores

Viernes Video: Latino writer taps his culture to create a film that dances to a salsa beat
Comment
Two entrepreneurs bring the adrenaline rush of Running with the Bulls to US shores