Latina Lista: News from the Latinx perspective > Columns & Features > Global Views > Salvadorans found to have the most positive attitudes towards the US

Salvadorans found to have the most positive attitudes towards the US 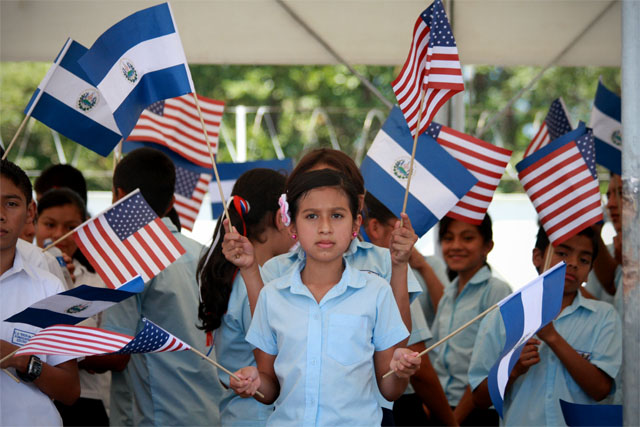 Pew Research released the results of its Global Attitudes Project last week and Salvadorans emerge as the people with the most positive attitudes towards the US out of all people in the hemisphere, perhaps in the world. Here are some of the survey’s findings.

79% of all Salvadorans have a positive view of the US.
Over 75% have a favorable opinion of the American people.
88% characterize the US as a partner while only 2% as an enemy.
70% of Salvadorans say that the US considers their country’s interests a great deal/fair amount.
Like most people in the world, Salvadorans do not support the US use of drone strikes. 81% disapprove.
54% have confidence in Barack Obama to do the right thing in world affairs while 62% approve of his international policies.
Obama’s re-election led 72% of Salvadorans to have a more favorable view of the US.

Pew also asked a number of questions about China. Here is one that indicates that 71% of Salvadorans say it is more important to have strong relations with the US than China, much higher than others in the region.

This was the first time that El Salvador was included in the survey so we have nothing to compare the results to over time. However, compared to its Latin American neighbors, Salvadorans hold very favorable opinions towards the US. Some of the attitudes are obviously driven by the fact that around 2 million Salvadorans live in the US. But the high marks are probably driven as well by our two leaders relationship with each other. President Funes visited the White House in 2010 and President made a historic visit to El Salvador in 2010.

Some Salvadoran economic elites are most likely favorable towards the US for passing the Central American Free Trade Agreement which was an agreement promoted by Central American presidents, not the US. Other Salvadorans might have a positive attitude towards the US because of the solidarity that Americans have shown through thousands of service trips and their ongoing support for El Salvador’s protection of the environment and their health through a mining ban.

There’s also probably a good chance that US programs such as the Millennium Challenge Corporation Compact and the Partnership for Growth are positive influences. They show a tremendous ability of the US and Funes and FMLN to work together. These two programs bring together representatives from the US and Salvadoran governments, the FMLN and ARENA, and civil society and the private sector. Remember, the US spent over $6 billion dollars trying to prevent the FMLN from coming to power in the 1980s. And while not as pronounced, one could read much of the US’ actions in the postwar as also driven by concerns about keeping the US out of power.

To continue these two programs with the FMLN, even with the controversial Decree 743 and judicial appointments which all political actors were responsible for, says something about the strong bonds between the two countries. The US worked with the Christian Democratic Party during the 1980s, the ARENA in the 1990s and 2000s, and now works relatively well with Funes and the FMLN.

What perhaps is even more telling is that the US is working with the current government to develop a second MCC Compact for approximately $300 million when it is growing increasingly likely that the next president of El Salvador will be the FMLN’s Salvadoran Sanchez Ceren. It’s one thing to enter into an MCC with ARENA’s Tony Saca and into the Partnership for Growth with the FMLN’s Mauricio Funes, but it is another to do so when a former guerrilla leader has a very good chance of taking the reigns of power in 2014.

El Salvador, Pew Global Attitudes Project, United States ally
Previous Post Guest Voz: We are a better society when people are not quiet — Standing up for Trayvon Martin
Next PostStudy Identifies Jobs With Largest Number of Uninsured in Oklahoma

Guest Voz: We are a better society when people are not quiet — Standing up for Trayvon Martin
Comment
Study Identifies Jobs With Largest Number of Uninsured in Oklahoma