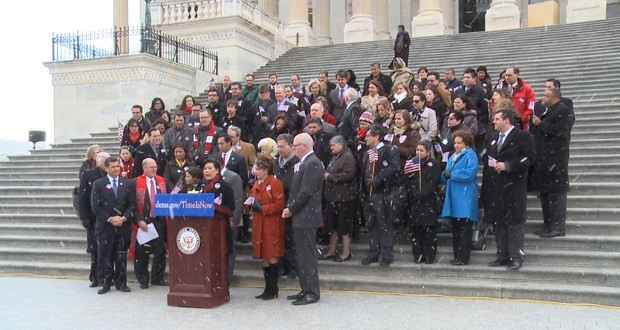 Discharge Petition — A procedural tactic that allows an absolute majority of the House of Representatives (218 lawmakers) to force a floor vote on a bill, even if leaders who control the House floor oppose the measure. Successful use of discharge petitions conceivably could help the minority party hijack the majority party’s legislative agenda.

On Wednesday, March 26, Democrats in the House of Representatives announced plans to file a discharge petition to force House Republicans to vote on HR 15, the “Border Security, Economic Opportunity, and Immigration Modernization Act.”

The announcement, though lauded by the White House, has only stirred lukewarm reception among those in immigrant advocacy groups.

In the following, one of the most recognizable advocates for comprehensive immigration reform, María Gabriela “Gaby” Pacheco, expresses her skepticism at the motives behind the Democrats’ filing of the discharge petition and how the lives of 12 million people have become pawns in a political fight that is all about partisan influence and less about the well-being of the most vulnerable people in the country.

I really wish this was a real attempt at getting immigration reform done, but everyone knows this is just a fake attempt to make Republicans hurt.

There was no thoughtful process in putting HR15 together. If this was a true effort, then this legislation led by only Democrats, should be more progressive than it is and it wouldn’t carry all the awful things the Senate legislation picked up during its mark-up period.

The truth is Democrats want Republicans to hurt. Republicans haven’t been good to our communities but they are still in power so something drastic had to be done to come on top of Republicans in the next elections. They need something to run on because Democrats are in great danger of losing the Senate. Thus, this big ploy of the discharge petition.

It’s all politics folks. And politicians on both sides, Republicans and Democrats, much like Rep. Becerra are playing with our lives. What makes me sad is the false hope we are giving our community. I hope members of the media read this and not misinform their readers.

It really is in most cases choosing the lesser of two evils. This is why I believe advocates can’t be politically affiliated. They can’t serve their party while serving their communities. There’s a conflict of interest and more than once we have seen people chose party over people.

I will however speak the truth even if I get belittled, bullied, harassed or even if I lose friends. I put my family and community first because I have seen the pain too close to forget it.

I know what it feels like to be woken up in the middle of the night by a police officer and ICE agents in my home. I have seen the fear in the eyes of my mother and my brother as they were saying goodbye. I have seen children cry for their parents.

I have also seen advocates be torn because they know they are wrong but their loyalty to their party, power, and access blinds them…paralyzes them like fear paralyzes our community.

Featured Photo: Rep. Judy Chu, D-Calif., speaks for scores of supporters on the East Front of the Capitol demanding that House leaders bring comprehensive immigration reform for a vote. Democrats have filed a discharge petition in an attempt to force that vote. (Cronkite News Service photo by Whitney Ogden)

María Gabriela “Gaby” Pacheco is co-director of the Bridge Project.