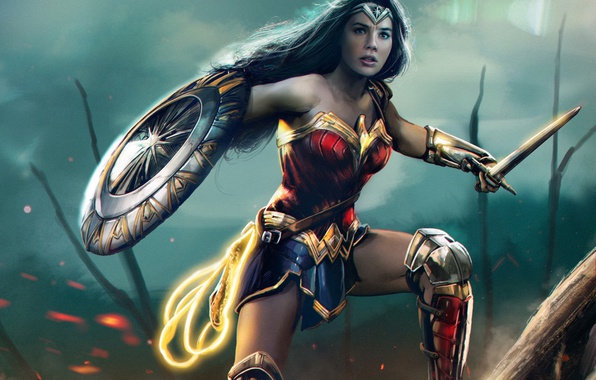 Fighter for justice, seeker of truth, powerful, and stunningly beautiful while dodging bullets? Could this be the new female Super Hero? Say hello to Wonder Woman and while we are at it – let’s call her a SHERO. This is a new kinda Chick Flick!

Women rushing to theatres with popcorn in hand won’t be disappointed with this action-packed film where Wonder Woman fights to end all wars. Unlike Batman, Superman, and Spiderman, however, Wonder Woman is the real deal. She has a history and actually did help save the world. Yep we know: women get the job done!

During World War II, women were needed to run the economy while men went off to fight. Rosie the Riveter, who portrayed women running factories, and Wonder Woman, the first female action hero, were created to change women’s ideas about what they could do. Before the 1940’s, women were told:

Of course all of it is simply not true.

Mother Nature simply would not choose “the weaker sex” to give birth and keep the species going. No way Jose!

And as far as this being a man’s world – well, isn’t it time to create a world that works for everybody, especially women and children? Wonder Woman can inspire women to do just that!

Wonder Woman was initially depicted as a warrior that fought the evil axis military forces. WOW! Women could see themselves as leaders with power and strength. Brave enough to speak up and stand up – to do what is right.

Wonder Woman had superhuman powers. Her lasso of truth forced anyone it captured to tell the truth. Imagine having one of those today – no fake news and no unapologetic lying by politicians.

And what about the array of psychic abilities – telepathy and ESP that Wonder Woman has? Well, we all have women’s intuition. Women don’t know how we know what we know we just know we know it.

We have to start trusting our intuition and inner compass. In the movie, every time Wonder Woman is told. “You can’t do that – its’ impossible,” She just goes and does it – and then the men follow.

The Wonder Woman movie came out at the perfect time. In three short years, women will celebrate 100 years of having the vote. Yet women have not reached equality and certainly not at the top.

Women still earn 80 cents to the man’s dollar – Black women 63 cents. Latinas 54 cents. Thirty percent of female-headed households are in poverty – and in the richest country in the world – more than 1 in 5 children are poor and go to bed hungry.

Isn’t it time to say basta!

Isn’t it time for Wonder Woman Leadership – to ignite our warrior spirit, to take out our lassos of truth – and use our array of psychic and intuitive abilities to create a just and equitable for our children and grandchildren.

There was another old saying they use to tell women in the “olden days” – “A Woman’s Work is never done!!” Yep that is right! So let’s finish the job Ladies!!

We have the power! We are warriors. So watch out! Wonder Woman SHEROS here we come!

Juana Bordas is the award winning author of Salsa, Soul, and Spirit: Leadership for a Multicultural Age and The Power of Latino Leadership. She is a nationally respected leader, diversity expert, and women’s advocate.