Guest Voz: Pressure to pass immigration reform is “stronger than ever” 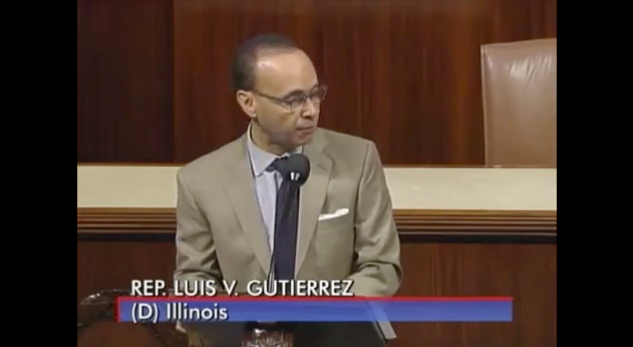 We have all heard that later today, an immigration bill will be introduced in the House of Representatives in order to keep the issue moving forward.

I plan to sign-on to that bill that, as I understand it, will combine elements of the Senate’s bipartisan compromise bill with a bipartisan House border security.

I am going to sign on because I want to stand with 200 Democratic colleagues and assert that the Democratic Party is ready to move forward on immigration reform.

The bill that Democrats will put forward is not the perfect bill. It is the product of negotiations, compromise and bipartisanship.

Having spent many long hours working with Ted Kennedy, John McCain, Jim Kolbe, and Jeff Flake on bipartisan bills in 2004, 2005, 2006 and 2007, I know that you never get everything you want when you engage in a genuine, bipartisan effort.

But these days, with our sharply divided politics, bipartisanship is the only way you get anything at all.

The American people are sick of the U.S. Congress because we are totally divided and can’t seem to come together even to keep our government open.

Yesterday, Puerto Rican Korean War veterans and Mississippi and Iowa veterans of World War II had to break down barricades to visit the monuments on the national Mall that celebrate their sacrifice and honor.

It should not have to come to this.

And on immigration, I still think we have a chance to work together and get something done.

It is rare that the AFL-CIO and the U.S. Chamber of Commerce agree on anything. But you know what? They have come to agreement on how we move forward on immigration reform.

The agricultural companies and growers have actually worked out how to move forward on immigration reform with the union founded by Caesar Chavez that has been fighting them for forty years.

The New York Times and the Wall Street Journal editorial pages represent different ends of the political spectrum, but their editorials on immigration could practically leave them open to charges of plagiarism, they are so similar in calling for Congress to address immigration reform.

And I have talked with my Republicans colleagues and they too understand that our current legal immigration system is broken.

Many of them understand that creating ways for people to come legally are necessary to spark our economy, reunite families, and maintain our openness in the United States.

They understand that the path to law and order is to have a functioning legal immigration system that allows people to come with a visa and not a smuggler.

Many of my Republican colleagues understand that we cannot secure the border unless we combine border security with a legal avenue for people to come here.

And they understand that we cannot establish law and order without getting the millions of people here into the system, on the books, and legalized as legitimate Americans. Including citizenship for those who choose to embrace this country, just as every wave of previous immigrants have had that choice.

And many of my Republican colleagues realize that the best way — politically and practically — to achieve full implementation of things like E-Verify and an entry/exit system — and the only way to efficiently enforce our laws — is if we allow for legal immigration. We can and must do the legalization, the border security, and the enforcement together.

With the introduction of a bill, you will see how unified the Democrats are. But I believe it is only after we emerge from this dark tunnel of partisanship and budget bitterness that we can find a way for the real leaders in both parties to move forward, work together, and force the Speaker to give us a vote.

But the clock is ticking. Two million people will have been deported by this Administration — a Democratic Administration — sometime in October. Believe me; the deportation machine does not pause for a government shutdown.

And this Saturday, October 5th, in 163 cities, there will be marches, demonstrations, and activities to push this Congress and especially the Republican Leadership to allow a vote on immigration reform.

I will march in Chicago, meet with evangelical leaders, and join canvassers fanning out across various Congressional Districts on Saturday.

And then on Tuesday, October 8, I will join tens of thousands of Americans, immigrants, supporters, citizens for a concert and rally to make sure this Chamber knows the truth. And that is that the persistent and consistent pressure to pass an immigration bill in red states and blue states and purple states has not subsided and is stronger than ever.

Come join me, Mr. Speaker, and I will show you the faces of families who want this Congress to put aside our party differences and act. For the families of America, for the millions of citizens that need a fair and just immigration system.

Rep. Gutiérrez’s remarks were delivered and videotaped this morning on the floor of the House of Representatives.