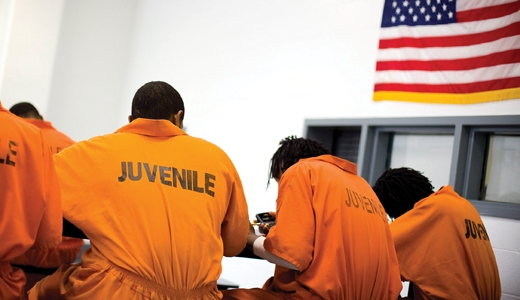 By Tracy Velázquez
The Chronicle of Social Change

The traditional view in the United States – which is codified in law – is that youths become adults when they turn 18. But the reality is that many young adults continue to depend on their families, and most of the experiences that will establish them as independent citizens occur in the years after that.

But for another set of young adults, the transition to adulthood will begin with court dates, jail time, probation and even prison sentences. People aged 18 to 24 were sent to prison for violent and property crimes more often than any other age group. Although they make up about ten percent of the total population, this age group accounts for over 29 percent of arrests. Most of these offending young adults are men, and the vast majority will remain or return to society.

They will emerge from their early involvement with law enforcement as men and women with their whole lives ahead of them, but with dimmed prospects for those lives.

Should young adults be held accountable for their criminal behavior? Certainly.

But the time has come to acknowledge that many young adults who moved from schoolyard to jail yard had a host of interceding circumstances. Young adults are the victims of violence at more than twice the rate of the total population. Foster youth are far more likely than any single group of children to be arrested in early adulthood. And young adults overall are still far from mature, often still heavily influenced by peers, prone to risky behavior and lacking the psychosocial skills that act as a brake on older adults.

It is time for U.S. systems of justice to explore the notion of creating a third court process for young adults, one that balances the need for accountability with the reality that jeopardizing the future of young lawbreakers is the best way to produce career criminals and intergenerational poverty.

This young adult system would rely less on incarceration, more on treatment and skill-building, and would shield offenders from a lifetime of collateral consequences in the education and job marketplace.

Some will argue that such a system would coddle those who have transgressed against fellow citizens and would be unfair to victims. I’d submit that the least effective way to reduce crime is to continue placing thousands of young adults on a trajectory away from employment and positive life opportunities, and toward a future with limited educational and employment options, continued justice involvement and dependency on the social safety net.

As participation in restorative and participatory justice programs shows, many victims, who themselves are often young adults of color, have come to believe that our current traditional processes do little to improve community safety or help them heal.

I encourage you to read my entire white paper on this subject, which The Chronicle of Social Change publishes here today.

Tracy Velázquez is an independent consultant on criminal and juvenile justice issues. She is past executive director of the Justice Policy Institute, and prior to that was with the Vera Institute of Justice’s Center on Sentencing and Corrections