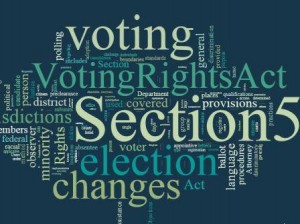 The law may sometimes lie in suspended animation — like it is now, today over voting rights — but politics always moves relentlessly ahead.

So while the justices of the United States Supreme Court contemplate the fate of Section 5 of the Voting Rights Act, which requires federal approval of election law changes in certain jurisdictions with a history of racial discrimination, and the nation awaits the Court’s judgment in Shelby County v. Holder, lawmakers in dozens of states around the country have been moving forward with related legislation that would restrict the right to vote for millions of Americans.

The results of a new Brennan Center survey released last week would be remarkable in any year — so much legislative effort designed to make it harder for citizens to vote! — but the statistics are particularly compelling this year because of the pendency of the strong constitutional challenge to the preclearance provision of the 1965 federal voting law. State lawmakers aren’t waiting to see how Shelby County turns out. And they aren’t chastened by their losses in federal court in 2012.

First, the good news. A number of states have introduced measures to improve access to voting. Lawmakers in Florida and New Hampshire, for example, two states notorious for their recent narrowing of voter access, have voted to reverse some of the more restrictive rules put in place in 2012. Voters in Wisconsin just last week voted to keep the state’s same-day registration law. And hundreds of so-called “reform” bills are pending in state houses across the country.

Now the bad news. Since the beginning of 2013, the Brennan Center reports, at least 80 restrictive voting bills have been introduced in 31 states. Sixty-six of those bills are still pending in 26 states and 27 such measures in 14 states are moving forward in state houses from sea to shining sea. Lawmakers in six of the nine states fully covered by Section 5 of the Voting Rights Act have introduced restrictive voting laws. So have lawmakers in three of the six states that are partially covered by Section 5.

Since January, at least 22 states have introduced measures requiring photo identification at polls. At least seven states are considering bills to reduce early-voting or in-person absentee voting periods. No fewer than nine states are considering measures to limit voter registration. Some of these measures no doubt are constitutional. Others may not be. But all of them are likely to have a disproportionate impact upon minority citizens, the elderly, students, and indigent citizens.

In Arkansas, lawmakers have passed a photo identification law that will impact the rights of minority citizens there. In Virginia, lawmakers have passed a similar law and also a law narrowing the scope of voter registration. These measures won’t go into effect until 2014 and will almost certainly be challenged — if Section 5 is still a viable provision of federal law following the current Supreme Court term. The justices are expected to announce their decision in Shelby County no later than the end of June.

These recent legislative developments are not part of the record of the Alabama case before the Court. Nor will the justices necessarily take judicial notice of the political posture of the measures now circulating through state houses. Thomas Goldstein, the lawyer who founded the SCOTUSblog website and who argues regularly before the Court, told me Friday that the Court’s conservative justices may be paying attention but still “will be much more suspicious that the adoption of racially tinged voting restrictions in covered jurisdictions remains a widespread ongoing problem.”

The justices are going to vote how they are going to vote, in other words, but that doesn’t mean that the rest of us should ignore the context and perspective here. During oral argument in late February, the justices were told by the lawyer for Shelby County that Section 5 could no longer be constitutionally justified by current conditions. And yet in the weeks both before and after that argument there is new proof in many covered jurisdictions that Section 5 is still relevant. The push for such legislation is unrestrained by the pendency of the Shelby County decision — as if these state lawmakers are betting on the demise of the preclearance provision.

It’s a striking dichotomy that begs the following questions: If the justices strike down Section 5 as under-inclusive, will Congress respond with remedial legislation to fortify the section? Are the state and local politicians pressing for restrictive new voting laws inadvertently giving federal lawmakers the justification they need for the imposition of a national preclearance rule that wipes away the pending argument that Southern jurisdictions are being unfairly put upon by Section 5?

One of the most powerful arguments against the preclearance provision is that federal lawmakers in renewing the statute in 2006 did not update or justify their decades-old formula for determining which jurisdictions merit “coverage” under the law. Covered jurisdictions, of course, bear the burden of proving their new election measures do not discriminate.

So how about a new Section 5 coverage plan that requires officials in jurisdictions like Ohio and Pennsylvania — which have seen discriminatory voting policies and practices in recent elections — to justify their new measures in the same fashion that officials in Alabama and Florida do now?

Don’t laugh. The pervasiveness of the new generation of voting restrictions — in state after state after state — is making a national standard more plausible as a political matter and more justifiable as a constitutional principle. And that would mean a quite unintended consequence of the decades-long fight to strike down Section 5.

The folks opposed to preclearance would see it imposed in more states around the nation. And the folks supporting Section 5 would see in the looming Court decision striking it down an opportunity for a rebirth that would make the law stronger than it is today.

Andrew Cohen is an independent fellow at the Brennan Center. His views do not necessarily represent the views of the Center.