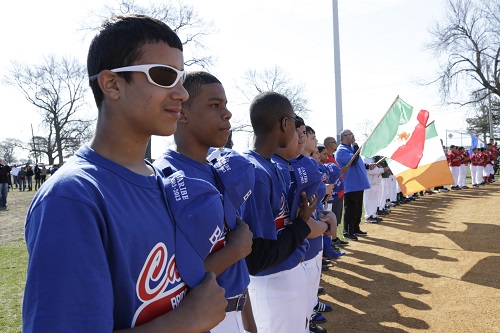 When the Bridgeport Caribe Youth Leaders (BCYL) celebrated its first opening day back in May 2004, no one in attendance could have imagined the amount of children, many of them Latinos, who would benefit from the program over the next decade — not even BCYL’s co-founder John Torres.

Ten years later, the organization has served more than 3,000 youths through their program.

“It was just meant to be a baseball league. Did I ever think it would be as big as it is today? Absolutely not,” he said.

Jayson Velez, 18, is just one of the countless players whose life have been changed by the league’s generosity and focus on education and teamwork. Not just a sports league, BCYL teaches its players that education comes first, and it does so by giving incentives for academic achievement.

Velez’s father coached a basketball team and he joined the program when he was 12 years old. Six years later, he was awarded a four-year scholarship to the University of Bridgeport as a part of BCYL’s scholarship program. He is now majoring in mass communications and is required to maintain a 3.0 GPA. The scholarship covers all tuition expenses, and his only financial responsibility is to pay for room and board.

While a freshman at Bullard Havens Technical High School in Bridgeport, Velez took his father’s position as the basketball coach, remained active with BCYL throughout high school, and is still involved as a college student.

The four-year scholarship fund is a joint collaboration with BCYL, the Diocese of Bridgeport, and involved parents, that states the diocese will match the financial contribution of BCYL. Parents are responsible for the remaining balance. Scholarships go toward the University of Bridgeport and Eastern Connecticut State University.

“A lot of the kids that are on my team have been a part of the incentive program. I encourage them to keep pushing. I always check up on them to make sure they are doing the right thing and getting good grades,” Velez said.

Velez represents the root of the BCYL – encouraging younger players to strive academically and instilling in them the same motivation he received from the organization when he was younger.

Earlier this month, the league celebrated its tenth annual opening day at Seaside Park in Bridgeport. BCYL has remained true to its mission, “Building Today’s Youth…Tomorrow’s Leaders,” by focusing on teamwork, both on and off the field.

In August 2003, John Torres and his brother Sam established BCYL in memory of their father, Martin Torres. Born and raised in Bridgeport, they share countless memories of their father coaching their baseball teams at Seaside Park.

Today, BCYL has become a platform that has provided thousands of children and teenagers, ages five to 18, not only an opportunity to engage in a variety of sports teams, including baseball, basketball, softball, cheerleading, and a soon-to-be drill team, but to learn the importance of working together and academic success.

With more than 200 volunteers on hand, teamwork is the motivational force of BCYL…