Latina Lista: News from the Latinx perspective > Local News > South > A quest to wake Texas Latinos from their political siesta

A quest to wake Texas Latinos from their political siesta 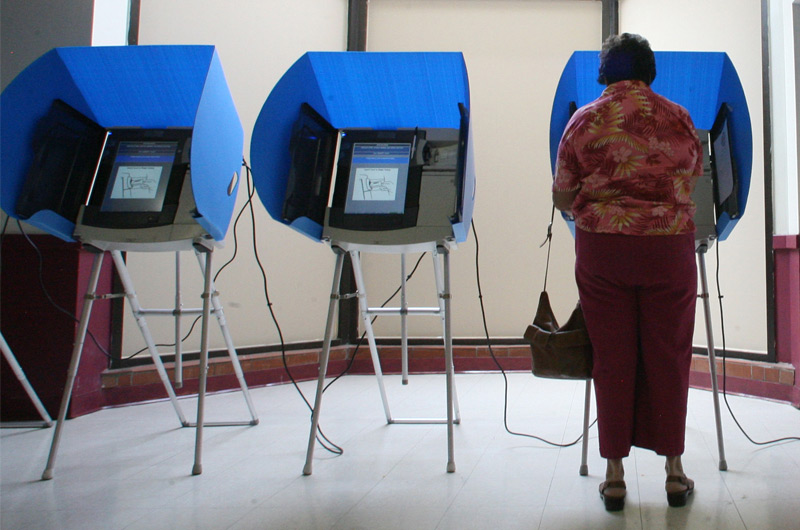 It’s no secret that Hispanic voters in Travis County have a hard time finding an election booth. In the recent March 4th, 2014 primary season, out of some 98,000 registered Hispanic voters, only 8,448 bothered to turn out to vote. In terms of percentage that’s a lousy 8%.

But in the coming weeks, all of this is about to change if a man named JD Gins has anything to say about it. And he does. This fast-talking, master of adjectives and adverbs, is one of the masterminds behind a get-out-the-vote plan that expects to vastly improve voter turnout in November especially in the Latino community.

At a recent meeting of activists at the Travis County Democratic Party offices on MLK, where he works and serves as the Executive Director, he spent a couple of hours explaining how the Democratic Party is going to pull off this project. The interview below is J.D. Gins in his own words.

La Voz: Mr. Gins, On August 5th, 2014, you had a meeting with a dozen or so community activists including Texas State Representative Celia Israel and and a former Texas State Senator Gonzalo Barrientos where you went into detail about how the party is going to wake up voters to the fact that they can make a difference in the upcoming elections.

J. D. Gins: The number one thing I hear is “more dedicated resources’. We also need to begin our outreach a lot sooner than what traditionally happens. If we want to make progress in motivating voters who have not traditionally participated in elections then we need to spend resources communicating with them early and often.

But if we really want to motivate the vote we need to talk about issues that are important to them so we can explain how voting Democratic truly affect their lives. Not just show up the week before the election.

Our plans this year are based on a pilot project that the party ran in 2010, called the 21 precinct project. Local legend Crystal Viagran developed this idea when some additional resources became available and the Party saw real results and true success. We are committed to expanding and building on the lessons learned.

Our partnership with our allies has made this possible. With some much resources being poured into our county by Wendy Davis, Planned Parenthood and others, our coordinated campaign resources can be dedicated to motivating unlikely voters, not persuading likely voters.

La Voz: When you look around the state, are the Hispanic voter turnout figures for Travis County very different from other counties?

J. D. Gins: Honestly, the turnout in Travis County is like it is everywhere else in the state. It is low. If you look at all the major metro areas there is huge potential in the Hispanic vote. Often times people think of the Valley as where the future majority lives, but cities like Houston, Dallas, El Paso, San Antonio and Austin have as much if not more raw potential.

La Voz: How Red a State is Texas?

J. D. Gins: Texas is not a red state, it is a non-voting state. But when voters across this state stand up and say enough is enough, we will turn the tide.

La Voz: In that meeting you held on August 5th, 2014, you talked about the canvassers. Share with our readers what the canvas program may entail.

J. D. Gins: Our program is based on the simple belief that a face-to-face conversation at the door makes the biggest impact in motivating a voter to participate in the election. We are prioritizing multiple visits to voters’ doors between now and election day. Additionally, we are registering voters in those households, recruiting volunteers for neighborhood teams and helping seniors register to vote by mail.

La Voz: And what is the biggest challenge?

J. D. Gins: Right now our biggest challenge is recruiting to fill all the postions we have. We need people from the communities we want to communicate with to participate in our efforts.

La Voz: In November, in Austin, there are going to be a number of issue that voters will be asked to weigh in on. How will all these issues and candidates affect voter turnout?

J. D. Gins: I think the top of the ticket will continue to drive turnout. The reality is the statewide campaigns have the most resources and will drive the most work in the field. I think the party efforts are included in that as well.

But with the historic move to the new 10-1 form of government and so many campaigns underway, 78, I believe, I do think that in some of these districts turnout will be increased as a result. In District 3, which is heavily Hispanic there are around 12 candidates who are all going to be comminucating with voters and motivating people to turn out. In a district like that, it is likely that voters who turn out for a city race will likely vote for our Democratic slate of candidates as well.

Additionally with other ballot measures like Proposition 1, transportation initiatives like the urban rail, I think there are a number of reasons people should be motivated to vote.

La Voz: Can you talk about the Secure Communities resolution the TCDP passed?

J. D. Gins: I am proud our party took this stand. The Travis County Sherrifs department is 4th in the nation for deportations of non-violent undocumented residents. There is no way that reflects our values in Austin. Sometimes it is hard to push back on issues like this but our party spoke with a clear voice, we would like the Sherrif’s department to do the right thing and stop honoring the ICE detainers.

You couple that resolution with the resolution we passed seeking the Austin Police Department to review their disproportionate use of force and searches among people of color, the TCDP is truly taking some bold stances and communicating about issues that actually affect people’s lives.

La Voz: Let’s share with the voters some of the job duties you have as the Executive Director of the Travis County

J. D. Gins: Day-to-day there is a lot of work to be done. I spend a lot of time communicating with activists, planning for the future, write campaign plans, target our voters, manage political relationships, make quick decisions about priorites, fundraise, resolve disputes and I even get yelled at from time to time.

La Voz: How do you manage it all?

J. D. Gins: I am very lucky because I work with so many great people. Our Chairwoman, Jan Soifer works so hard and the prioritization of this GOTV plan would not be possible without her. We often joke the challenges she faces is why she gets paid the big bucks, but that is a joke because she volunteers her time to chair the Party and has done amazing work.

The party staff is streached so thin but is doing amazing work. Krisitan Caballero has come on as our Political Director and has prioritized our diversity outreach. She is focused on inclusion in the decision-making process with key stake holders and welcomes participation in our process. We are so lucky to have her.

J. D. Gins: Cesar Chavez said, “We don’t need a perfect political system, we need perfect participation.” This is something I believe at my core. People don’t think their voice matters. They don’t think they can make difference in the political process. But that is why we are a non-voting state.

When people stand up and participate, make their voices heard and shape the political discourse with their opinions, anything is possible.
We know its hard for people to give so much of their time to this when they have bills to pay and the struggles of day-to-day life, but (we) need everyone to participate, vote, register voters, talk to your neighbors and if you can come work with us — We are hiring and paying up to $14 an hour.

Your voice truly does matter.

We are going to do our best to wake people out of this political slumber. We have got to improve voter turnout in the State of Texas.