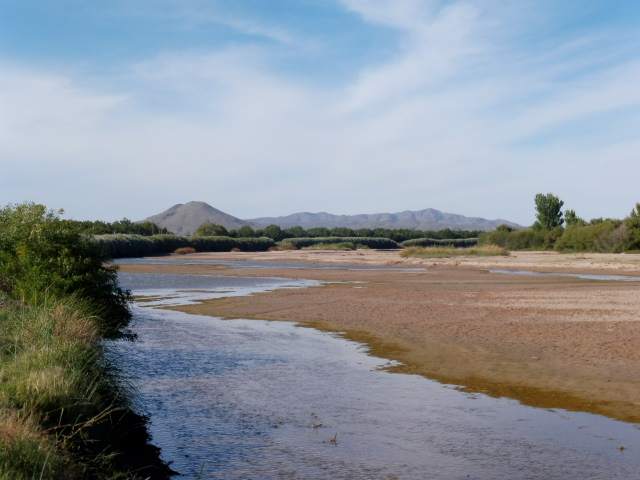 Dr. Luzma Fabiola Nava was somewhat startled by the recreational activities she witnessed on a New Mexico stretch of the Rio Grande/Rio Bravo.  Arriving in the Land of Enchantment to study the Rio Grande, Nava was accustomed to rivers in places like Canada that don’t dry up.

Currently the Luis Donaldo Colosio Fellow at Vienna’s International Institute for Applied Systems Analysis (IIASA), Nava is doing post-graduate research on binational issues related to the management and allocation of the Rio Grande’s waters, with a particular emphasis on the Paso del Norte region of Ciudad Juarez-El Paso-Las Cruces.

Her research is the latest phase of a long investigation of the politics and practice of Rio Grande management. It’s a project that’s taken her from the headwaters of the Rio Grande in Colorado to as far south as Laredo, Texas. Along the way, the Mexican scholar estimated that she’s interviewed scores of key stakeholders, planners and officials from government and non-government organizations alike, including 20 in Mexico and more than 50 in the U.S.

The actors charting the future course of the Rio Grande Nava contacted included the Middle Rio Grande Conservancy District, the U.S. and Mexican sections of the International Boundary and Water Commission, the U.S. Fish and Wildlife Service, the Southwest Environmental Center, the Paso del Norte Watershed Council, irrigation district leaders in both Mexico and the United States, and others.

In her travels and deliberations, Nava realized that the Rio Grande is actually made up of (manmade) sub-basins with their own characteristics. For instance, in New Mexico, “the difference between the Middle Rio Grande to Elephant Butte (Reservoir) and below Elephant Butte was contrasting,” she said.

A visiting fellow with the Department of Geography at New Mexico State University in Las Cruces from 2010 to 2012, Nava came to the Paso del Norte as a crisis gripped the Rio Grande. As an extreme drought forced severe cutbacks in water allocations to irrigation districts on both sides of the border, thick column inches were devoted to the river in regional newspapers.  Upstream from the Paso del Norte, massive wildfires scorched the mountains guarding over the river.

“In times of drought the need for stakeholders to work together was higher. I saw some collaboration; they were responding to the drought,” Nava recalled. “I think it was a very stressful moment.”

While more rain in the last couple of years has ameliorated the urgency of the  crisis and knocked the Rio Grande from the headlines, the underlying issues of aridity, climate change and binational sharing of a fragile water source remain.

In a written summary of her work, Nava defined the Rio Grande not only as “one of the most endangered rivers globally,” but a “magical desert river” that is…