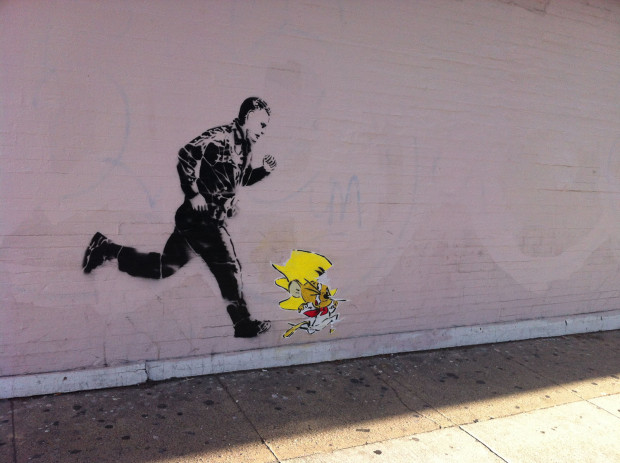 Hussein Dawah, 63, didn’t have to look twice to know that there was a work of art on the wall outside his restaurant on 19th and Valencia.

“This is not graffiti, this is art,” he said of the ICE agent chasing a mouse known as Speedy Gonzales, an American cartoon character much criticized for depicting an offensive stereotype of Mexicans. “Graffiti, I cover right away.”

Dawah believes it is art because it reminds him of previous street art that has made his business fit into the trendiness of the neighborhood, he said on a sunny Friday as he grilled kebabs he carefully wrapped in pita bread for his customers at Ali Baba’s Cave on 799 Valencia Street, a restaurant that he has owned since 1982.

He’s right. The images were done by the Mexican graffiti artist Yescka, who has visited San Francisco over the last three years with the purpose of teaching youth that art is a way to express themselves.

Kate DeCiccio, mural artist and art teacher at the Leadership High School, invited Yescka to participate in the project Painting with Purpose, which teaches teenagers the technique and development of a mural. They also learn how to integrate their experiences by finding powerful images that transmit how they feel.

“You notice the change in the kids. It’s a different environment, they are attracted to it and although at first they might be a bit apathetic, seeing the evolution of the work they have created allows them to develop [creatively]”, said Yescka of the five-day process of creating a mural at the Leadership High-School.

This year, however, his visit to San Francisco had an added twist…